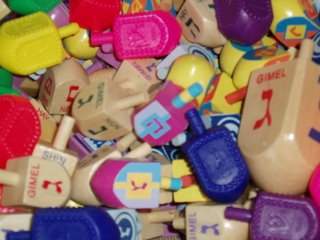 After you come light my menorah and eat my latkes and hear my Hanukkah stories, it is traditional you play a little dreidel.

Dreidel (or savion in Hebrew) is a spinning top game. Each player starts by putting a token (usually gold-foil covered chocolate coins called gelt -- See my story on gelt and See's Candies over at Sugar Savvy -- but some use pennies, M&M candies or Hershey kisses, toothpicks or even poker chips) in the pot.

Then players take turns spinning the four-sided top and, depending on what symbol they land on, either taking half the pot, taking it all, taking none or putting in a token.

For complete rules and an explantion and depiction of the symbols "Nun" (which looks like a left-facing bracket and means you get nothing), "Gimel" (which looks a bit like a nun with a leg on the right side and means you take all), "Shin" (something like a "W" and means you'll have to pun one into the pot) and "Hay" (kind of looks like a lower case "n" and means you'll get half the pot) check out this post from About.com on the game. If you don't have a dreidel and have no way to buy or borrow one, you can make your own. It's not exactly a little dreidel made out of clay, put this paper pattern will do the trick. Click here.

To read more of my Chronicles of Chanukah, please click here for the history and here for a recipe for latkes (potato pancakes). More on menorahs next.

Update: 12/10/12 -- The Sugar Savvy link is gone and the url has been taken over by another entity.
Below is the article I posted on Sugar Savvy about the See's gelt. It was originally posted 12/16/06.

To some Hanukkah is a celebration of religious freedom, a festival of lights, a time to light the menorah and share a special holiday with friends and family.  To The Chocolate Box, however, this ancient Jewish festival is all about the chocolate coins.


Coin-shaped chocolates, wrapped in gold or silver foil, and called gelt (Yiddish for money) and usually packed in little net bags are the traditional tokens for gambling with when you play driedel, a top game.  Win none, win all, win half or put one in, depending on what you spin.  The idea is not to eat your stash before the game is over.


Not everyone plays with gelt, of course. Some use pennies, toothpicks or other candies.  But to me, it just wouldn’t be Hanukkah with the golden gelt.  The only problem?  The chocolate always tastes terrible.


I’ve had versions made by American, Israeli and European manufacturers.  I’ve bought them by the pound in fancy candy stores and by the two-pound bag in the drug store.  I’ve had dark chocolate and milk chocolate.  I’ve played with gelt in foil wrappings that mimicked poker chips, American coins and Euros. It didn’t matter what I bought, they all tasted stale and metallic and were so brittle they broke as soon as you unwrapped them. (Except for the year I made my own and wrapped them in aluminum foil.  Tasted great but didn’t much look like gelt.)


So when I walked into my local See’s Candies store and saw a stash of glistening gold-foil chocolate coins, I was ecstatic.  For Hanukkah this year, we would have gelt without guilt.


Description:  I bought my gelt in the See’s Candies store where it was sold by the four-ounce yellow net bag.  It contained candy coins in two sizes, one coin about an inch and half in diameter, the other an inch, nicely wrapped in gold foil embossed with American coin images. The embossed image could be seen on the unwrapped candy, which was a rich milk chocolate color.  On the website, See’s sells the candy in a one-half pound box.


Taste:  In See’s We Trust?  Maybe not.  Perhaps, my expectations too high, but this gelt was not that good.  It had a rich and creamy taste like See’s other milk chocolate products, but it also had a very stale and metallic after note.  Maybe it has something to do with being wrapped in foil. It could also have something to do with how thin the chocolate has to be molded to make the coins.  It is better than any other chocolate gelt I can recall (except my homemade), but it still wasn’t that good.
Ingredients: Sugar, cocoa butter, milk, chocolate, soy lecithin, vanillin. It is a certified kosher product.
Well Fed Network Rating: On a scale of one to 10 as compared to other See’s Candies’ products, I would rate this gelt a four.  At first I was going to rate it even lower, but I think that was a reaction to my disappointment.  I tried the candy again a few hours later and found it was not quite as bad as I had first thought.  However, since most gelt is being bought for the concept and probably not being critically evaluated when it is being consumed, maybe what it tastes like is not that important.

Email ThisBlogThis!Share to TwitterShare to FacebookShare to Pinterest
Labels: Jewish