One Pot Chicken and Barley for the Jewish New Year 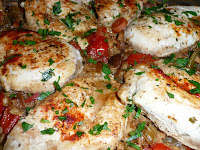 With the fall Jewish holidays on weekdays this year spending the whole day in the kitchen is just not going to be possible for me. So my solution for a “special” holiday meal is to make a chicken and barley one-pot dish with Eastern European Jewish flavors and ingredients and with lots of unattended cooking time. It can also be made ahead and reheated. Accompanied by challah, green salad, and maybe some pickles, and followed by a light fruit dessert you’ve got holiday dinner, at least at my house.

Barley has a distinctive texture and can take assertive flavors. The chicken breast halves stay juicy since they are not cut up but browned and cooked intact.

This is one of those dishes that taste even better when made ahead. If you make this in a casserole dish safe to use on the stove, you can make it ahead, store it in the fridge, reheat it in the oven and serve it all in the same dish (see note below). If you are making this recipe the same day you’ll have almost an hour of hands-off cooking time (and only one pot to clean later).

If you are making this for Kol Nidre dinner you may want to cut down on the spice, leave out the garlic and reduce the salt, since many folks like to minimize those tastes before they fast.

Season the breast halves on both sides with the oregano and ¼ tsp of salt and ¼ tsp of pepper. Heat the 2 Tbs of oil in a large (12” or bigger) sauté pan, chicken fryer, Dutch oven bottom or stove-top safe casserole over medium high heat. Add the chicken breasts and brown on each side until golden brown. Work in batches if necessary so as to not crowd the pan.

Remove the chicken to a plate and set aside. Add 1 Tbs of oil, heat and add the onions, stirring and turning in the oil until they are coated with the pan juices and separated into rings. Lower the heat to medium and cook for about 10 minutes, stirring occasionally, until onions are softened. (Be sure to get all the browned bits from the bottom of the pan stirred in as well.) Add ½ cup of stock as the pan begins to get dry. Raise heat to medium high and add garlic, ginger and red pepper flakes. Sauté for a minute, then add the next ½ cup of the stock. Add the celery, carrot, red bell pepper and mushrooms and cook, stirring occasionally until the vegetables have begun to soften. Add the barley and stir well to mix. Add 3 cups of stock, stir well. Taste and add remaining salt and pepper as needed (commercial stocks vary in saltiness; note that the barley will also absorb some saltiness). Raise heat to high and bring to a boil. Reduce heat to low and cover with a lid or foil.

Simmer covered for 30-35 minutes (barley should be getting tender to the bite). Remove the lid, stir and then nest the chicken pieces in the vegetable and barley mixture, pressing them down so they are about half submerged. Pour any accumulated juices from the plate on top of the chicken. Sprinkle the paprika on the chicken. Raise the heat back to medium high. Cook uncovered until the chicken is cooked through and the barley is tender but still has a bit of resistance in the center. Most of the broth should be absorbed, but the mixture should have some liquid but not be soupy. (About 15-25 minutes). Serve in the pan or casserole or transfer to a platter, garnishing with the parsley.

Reheating Note: If you plan on reheating, undercook the dish and leave a bit more liquid. Be sure to cover it when reheating in the oven and be prepared to add a little water or stock if it begins to dry out. For best results, take the pot or casserole out of the fridge and allow it to come to room temperature before reheating. 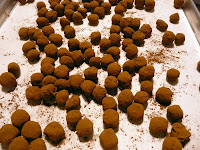 On the other side of the plate glass window, maybe a dozen people are peering intently at me. Why not, I must be a sight – wearing a black hairnet like some lunch lady, an oversized milk chocolate colored T-shirt covered with drips of real bittersweet chocolate and my hands covered in more of the stuff. I probably have cocoa powder all over me. I couldn’t care less, I’m at Charles Chocolates’ production facility in the San Francisco Bay area (Emeryville, CA) learning how to make truffles from owner Chuck Siegel, probably the sweetest man in chocolate. For more on my class, please check out my post on Sugar Savvy.

Much of the commercial kitchen at Charles Chocolates’ production facility can be viewed from a 40-foot long window. I imagine the gaping tour group was jealous because I got to go inside Chuck’s chocolate alchemy laboratory where everything comes out tasting golden. It was an amazing day and I hope you’ll check out the Sugar Savvy piece and read all about my experience and Charles Chocolates. Be sure to check out the website for info on the company, products, classes and other events, tours, newsletters and recipes.

Here’s one of the recipes we made that day. You can also find it on the website:

"Using a small melon baller or a small teaspoon, scoop small balls of ganache into your hand and roll until somewhat smooth and round. These should be approximately 1” in diameter. Place cocoa powder in a shallow bowl or pan. Roll the truffles in cocoa powder to coat.

"Truffles may be stored for up to two weeks at a cool room temperature (55-65 degrees) in an airtight container. Do not refrigerate or freeze; this damages the texture of the creamy ganache."
--------------------
Update 11/17/11: Sadly, Charles Chocolates went out of business this year not long after it moved its production facility and cafe to San Francisco.  The website (and links above) are no longer operational.  Sugar Savvy is long gone and the links for that as well, however, thanks to the Wayback Machine -- here's a link to my Charles Chocolate post. Also from the Wayback Machine is this link to the company's defunct website and its recipe page.
Posted by FJKramer at 6:55 PM 1 comment: 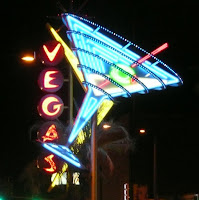 I've borrowed my husband's laptop and thought I would take a minute and update on more Vegas food.
Had another good meal at Second Street Grille at the Fremont Hotel (downtown). This is the third time we've eaten there in the five times I've come for market. It is a wood paneled enclave inside a visually and aurally busy casino. The food is Pacific fusion, the service is seamless, the prices are reasonable. Like all downtown restos they have their steak, but you can also get many more imaginative dishes here.
Downtown Vegas is changing, more about that in another post. We also ate at the Golden Nugget Buffet (we ate there in January, too.) It served the purpose on a night when we were tired and everything that seemed more upgrade restaurants in DOWNTOWN Vegas (Fremont Street) were booked solid. On a Monday night.
We got a good pastrami sandwich and chopped liver (just a light snack) at Canter's Deli in Treasure Island, an otherwise avoidable casino. Warning, it's in a noisy corner of a noisy casino.
Thanks to a typo in a local magazine, we headed out to see the Rio's free show in the sky on a Wednesday night. The show was dark that night. (The mag had it on Mon - Thurs when it really was Thursday through Monday). We did feel we beat the system any how by taking a free shuttle from our trade show to Harrahs and a free shuttle from Harrahs to the Rio (which meant only one cab fare to get back to our hotel.)
Highlights of the Rio: the view from the Voodoo Steakhouse (or Lounge), the almost-there outfits of the cocktail waitresses (how do they keep that on was one question that came to mind) and the great stuff at the Rio gift shop. Lots of voodoo and skeleton themed merchandise from picture frames to shot glasses to sweatshirts, all really pretty reasonably priced. (FYI -- the steak and the bread (many types, all good) were the best things about the Voodoo Steakhouse, although the decor is tasty. Since you can't eat the walls, try one of Vegas' many other steak houses and just go to the lounge for a drink instead.)
I'm a girl who against all sense and sensibility likes a buffet. So since we were at the Rio anyway, we thought we'd check out the hotel's widely praised buffets for future consideration. Eeech. The seafood buffet ($38 each the night we were there) offers the usual assortment of king crab legs, mysterious seafood stews, and a few choices of sushi along with oysters. It was unappealing in very many ways, but the room was very cleverly decorated and designed. Feast with your eyes only. The regular buffet ($24 the night we were there), skipped the oysters, added more ethnic food (the Asian selections actually looked appealing), but also failed to impress us.
We will go back to the Rio to check out the free show in the sky (Mardi Gras floats and entertainers), to maybe bowl a few at the Lucky Strike Lanes and maybe walk across the street to the Palms and check out the restaurants there.
-------------------
About the photo: Vintage sign. Taken downtown at the Neon Musuem
Posted by FJKramer at 11:20 AM 2 comments: