Happy 100th to Julia Child and My Julia Sighting

It must have been close to 30 years ago when I first dined at Chez Panisse, Alice Water's famed Berkeley, CA, restaurant. Back then I was overly intimated by name restaurants and Alice's restaurant was famed not only for its food and founder but for the impact it was already having on the cuisine of California and elsewhere.

I was prepared to be amazed and delighted and to have the meal I'd remember for a lifetime and I suppose I did, except I remember nothing, absolutely nothing of the meal.  All I remember is the charming, laughing, curly-headed, tall older woman sitting a few tables away who I instantly realized was Julia Child.

Alice herself came over to Child's table and there was much hugging and more laughing and pleasure in being together.  The two certainly seemed to be bon amies.

Just seeing two of my American idols was enough, I've never been one who needs to ask for autographs or impose on the famous since I've found their golden touch really doesn't rub off, but it is a delicious memory I'll always treasure.

A few years later I was at a women's club meeting in San Francisco.  There a few tables away, was a familiar looking woman - tall, curly-haired, booming voice, good natured.  I kept thinking she looked just like someone I knew.  A tablemate leaned over and whispered, "Oh, that's Dorothy, Julia Child's sister" and the mystery was solved.  Turned out Julia's sister lived in the Bay area.

I did not have any other brushes with Julia (or her sister), but I was always grateful to have had a chance to glimpse her in person.  Back then I didn't need to tell her how she influenced me, but 30 years ago her impact was more based on her cooking and her entertaining personality that the lessons I learned and the person I came to know between the lines of her recipes. (You can read some of that in my post about making Julia Child's lemon curd.)  Her dogged determination, her reinvention not just of herself but of cookery and the American food landscape combine to make a character worthy of being played by Meryl Streep.

One last word, it has been bandied about much that the elderly Child did not care for the Julie & Julia project (where Julie Powell cooked through Julia's Mastering the Art of French Cooking in one year).  I always felt the nonagenarian was broadsided by the interview. But later reading a post by a L.A. Times reporter and her discussion with long-time editor Judith Jones, I began to have more understanding for her position on it. Jones felt that Child had a generational difference as well as an impatience with such a derivative project. Sarah Moulton, also reported her friend Julia's disdain for those she felt would try to make money off her reputation and name.  I much prefer the report of a family friend who said Julia appreciated her work inspiring others.

I myself have mixed feelings about the blog and resulting movie, but I'm glad Julia's legacy has been made relevant for another generation of Americans.

Happy 100th Birthday, Julia.
Thanks for the recipes. 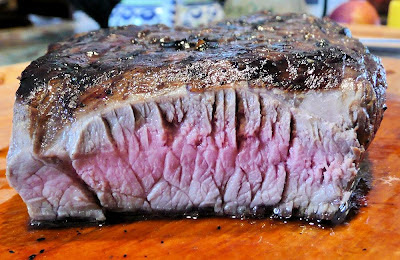 I‘ve always enjoyed grilling and eating outside. It somehow seems so special, especially if there is another couple or two, to have a meal outdoors watching for the first signs of sunset (and maybe if there are children involved toasting a few marshmallow over the coals as we waited).

To me the secret of cooking and serving outside is to organize the menu so there is no running back and forth from the kitchen to the grill.  I recommend cooking the steak and salad on the grill, baking some potatoes ahead of time to wrap in foil and reheat on the grill, and making Karen’s Very Chocolate Brownies for dessert (maybe topping them with some of those toasted marshmallows).

Be sure to let the meat rest for 10 minutes before slicing as thinly as possible against the grain (cutting perpendicular to the long meat fibers) for the juiciest and most tender results. The steak can also be cooked indoors under a broiler or in a grill pan or on an electric grill. Last time I tested this recipe I used London broil, but my favorite is with flank steak.  Skirt steak also works well. The marinade also works well on Portobello mushrooms if you are looking for a vegetarian option, but maybe you'd want to switch out the potatoes with a filling and protein-packed side dish such as quinoa

Mix the olive oil, wine, garlic, pepper, salt and oregano. Reserve 1/4 cup. Place the steak in a glass dish or plastic zipper storage bag. Add remaining marinade. Marinate for 2 hours, turning occasionally. Before preheating grill, brush rack with vegetable oil. Preheat grill to medium high heat, place steak on grill and discard the liquid it marinated in. Grill steak, turning and basting occasionally with the previously reserved marinade. Timing will depend on your grill and the cut of meat you are using. Cook to just slightly less done than you prefer (since it will continue to cook while it rests), remove meat to a cutting board, tent with foil and let rest for 10 minutes before cutting into very thin slices against the grain.

Preheat oven to 350 degrees. Grease 11x14” baking pan. Melt unsweetened chocolate and set aside to cool slightly. In a large bowl, mix flour, baking powder, salt and sugar. Without stirring, add the oil and the eggs to the center of the flour mixture. Add the vanilla and melted chocolate. Now stir, starting slowly, then beating well until smooth and dark brown. Add chocolate chips and mix well. Pour batter into pan. Bake 30 to 35 minutes until edges look crisp and have shrunk slightly away from the sides of the pan. Place pan on rack and let cool. Cut into bars or squares.
------------------------------------------------
A version of this post first appeared in j. weekly.
Posted by FJKramer at 9:59 PM No comments: