Chocolate & Zucchini – The Cookbook and Recipe

My overall impression of the book Chocolate & Zucchini: Daily Adventures in a Parisian Kitchen was very positive. The food (and Paris) photos, taken by author and web star Clotilde Dusoulier, are sumptuous, the recipes are imaginative but relatively easy to prepare, the directions clear and the little stories (known in the trade as head notes) before each recipe and each section are really charming and candid reflections on the author’s life and outlook and really give the reader a sense of Clotilde’s Paris.

At the book signing, Clotilde had described herself as drawn to combinations of ingredients that might look intriguing and combine in interesting tastes and textures and that predilection really comes through in the book.

The book has an interesting organization which makes for very pleasant reading. I very much enjoyed her extended forward which traces the history of her affinity to food, a section on her philosophy which encompasses her approach to life, not just to food marketing and preparation. There is also a chapter on how to stock a C&Z pantry. Wine pairings are offered by Lenn Thompson.

The recipe organization is somewhat unique. Instead of being listed as in chapters labeled as appetizer, main course, etc., the recipes are sorted into when you are most likely to serve them or the mood that might strike you to want to eat them. These include “Simplicity” (salads, sandwiches, savory tarts, soups and eggs), “Entertaining” (which offers up a complete dinner party menu, some appetizers, side dishes, recipes for a French-style buffet dinner), and a section called “Impromptu” which includes dishes the author feels can be whipped up without much notice using mostly staples), and finally a “Sweet Things” chapter, which, or course, features a chocolate and zucchini cake.

There are more than 75 recipes in the book; almost all of them have not appeared on her website. The ones that were have been reworked and adapted. The author seemed very concern of making sure the book would have appeal to long time website readers as well as those who are just making her acquaintance.

(Now, I am a fan of Clotilde and C&Z, but I am a bit afraid to mention my slight criticism of the cookbook. So many people are very much taken with her, the website and the book, that I am afraid of upsetting anyone. I’ve read of fans who are considering buying both the British and the American versions of this cookbook because the American version has one recipe the British doesn’t and the British one has two the American doesn’t. We are talking very loyal fans here.)

I find the recipe organization a bit awkward to cook from and the book could use additional main courses. When I tried to plan a menu out of the book it was a bit confusing going back and forth between sections where types of recipes overlapped.
To choose a starter, for example, I had to page through the “Simplicity” section, then the “Impromptu” section and finally the “Dinner Party” section. (I ended up making the Zucchini Carpaccio with Raspberry Vinegar, see below for more on that.) The book has an excellent index which helps somewhat.

My main course dilemma is that there are very few recipes to choose from. I found lamb tagine, beef bourguignon and Flemish carbonades (a kind of beef and beer stew) in the dinner party section, mustard chicken stew, steak tartare, lamb and prune meatballs and asparagus and sea bass papillotes elsewhere in the book. Now there were plenty other recipes (many vegetarian) that one could serve for a light dinner or in combination with others for a more filling meal, but I was disappointed there weren’t at least a few more traditional main course options.

Overall, though, her dishes and approach were inspiring and sent me out to the farmers’ market that weekend. My resulting menu was heavily inspired by Chocolate & Zucchini.

I had planned to open with her two-olive tapenade or eggplant caviar, but one vendor at the market had an amazing assortment of Afghani dips and flatbreads. I switched to that, a move that I thought Clotilde would have approved of based on her stories of taking advantage of food finds. The first course was the zucchini carpaccio (my directions for how I made that dish follow). The fishmonger had a wonderful piece of white sea bass (not an endangered or threatened species), which I cooked in the same manner as Clotilde’s sea bass dish (steam baked in a foil packet) but with the seasonings and vegetables that looked good to me at the market. The fish was served with some spring pea ravioli and light tomato sauce (again from a vendor at the market). Salad was simple and green. Dessert was sliced peaches and strawberries.

I definitely would never have thought to serve the zucchini in such a starring role in the meal and although the other dishes were not strictly speaking from the cookbook, I felt that reading it inspired the rest of the menu. 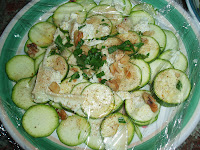 
Young, fresh, slender zucchini
Goat cheese (choose one that is on the drier side)
Vinaigrette made with raspberry vinegar
Ground thyme
Salt
Pepper
Chopped parsley or basil
Chopped walnuts

Cut the zucchini very thin into round slices. Arrange on individual plates to cover. Crumble or shave bits of cheese on top. Splash a light coating of the vinaigrette on top. Add thyme, salt and pepper to taste. Sprinkle top lightly with parsley or basil and walnuts. Cover with plastic wrap and allow the zucchini slices to absorb the vinaigrette and for the seasonings to meld.

Read more about "my" evening meeting with Clotilde here and here.
Posted by FJKramer at 11:55 AM

Someone in the blogosphere pointed out my pieces on Clotilde and the Chocolate & Zucchini Cookbook to her. I got a lovely email back from her saying how she appreciated my constructive criticism but explaining that she organized the book as she cooked and that the lack of what she calls "heavy" main courses was because most of the main courses she makes are simply cooked chicken, fish, etc., and the emphasis is on more creative sides.

I just wanted to post that here as a comment so you could read what she had to say.

That was a good, honest review, thanks!

It looks like Clotilde's Carpaccio Courgette recipe is garnering much attention! Check out Amateur Gourmet's version (http://www.amateurgourmet.com/the_amateur_gourmet/2007/06/clotildes_carpa.html#comment-73161824). I linked them to yours too.