What I've Done (and Eaten) This Summer (So Far) 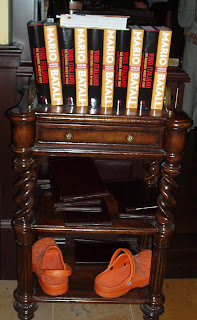 I'm back. It's been a busy summer. I've spent more time on the road for work and pleasure than I have at home and it's not over yet. I leave on August 26 for a tour of Eastern Europe and the Danube from Bucharest to Budapest. More on that later.

Where in the world have I been?

Two visits to Pinecrest, CA, with its lovely lake and alumni family camp where my oldest is a staffer this summer. I have no culinary glories to report, although a good time was had by all.

One trip to suburban Long Island, New York to visit my sisters and their families. I spent one day in the "big city" and had a very, very disappointing meal at the Empire Diner. This diner is one of those restored classics and one of the earliest to have been restored and converted to a "modern" menu. The best of the meal was the sweet potato fries which had a spicy brown sugary finish. I also had a very dry brioche at the Metropolitan Museum of Art (which fortunately had lots of tasty art to consume -- check out the newish Greco-Roman art galleries) and a fun time re-exploring the Chelsea Food Market, home of Food Network. (I saw a few empty studios but no Rachael Ray or Emeril sightings.)

My middle sister is an accomplished cook and her husband is an accomplished deep sea fisherman, so even if they didn't catch it, she cooked it and it was wonderful. I came home with a cache of fresh yellowtail tuna and frozen bluefin.

I also spent a week in Las Vegas. In July. It was 100 degrees at night at 11:30 p.m. and you couldn't even claim it was a dry heat since it rained several times. My husband and I are manufacturers' reps and we were working a trade show in town. I patrolled a showroom the size of Texas (well, it was 10,000 sq ft on a concrete floor with no rugs, so it felt like it anyway) and he went between three showrooms in two buildings. We worked hard and it was hectic, but we found some time for fun. Tops on that list, the show "O" at the Bellagio (Cirque du Soleil gets wet) and Mario Batalia's new restaurant at the Venetian, B&B. The food at B&B started off amazing and ended up being good. Think of it as the type of food your grandmother might cook if she had unlimited access to the best ingredients, was a gourmet and was an Italian peasant.

The marinated anchovies were brined perfectly, the texture still firm and the bite of the vinegar sharp without being overwhelming. My reaction to the mini ravioli stuffed with lamb brains in butter, lemon and sage sauce was mixed. The sauce was divine, the lamb brain stuffing more of a fluffy texture than a taste but worked well since it had a slight game note that cut through the butter sauce. The pasta dough was a bit thick and tough. The main course translated out from the Italian to be braised beef. On the plate it translated to a chunk of pot roast without enough sauce. You had to look really close to find the polenta it was served with. I've never seen a serving of grain that insubstantial before. It came under the heading of why bother. It certainly didn't add to the dish. The beef had a nice taste but was very dry.

Dessert was cinnamon ricotta fritters and a chocolate-hazelnut dipping sauce. I thought this was incredible. Gary was not that impressed and didn't finish his half, which left more for me.

The restaurant had only been opened for two months but you would never know it, the service was personable, modern and just right. The wine choices are amazing (B&B's co-owner is a wine importer) and I thought reasonably priced for the style of restaurant and location. Prices in general were about $25-29 for a main course which is not unusual for a Vegas "name" restaurant, but portion sizes of all but the main course were small. Since my husband I usually share that means minuscule. (I got two filets of those wonderful, but tiny anchovies and about six or so mini raviolis.)

The photo is of a small bookcase at B&B. The cookbooks are Molto Mario's and for sale. The orange clogs are presumed to be Mario's as well but are not for sale.
Posted by FJKramer at 10:01 AM