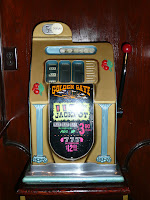 I'm back from Las Vegas. My husband and I are reps for several manufacturers and it was great to see the numbers of buyers that attended our industry's semi-annual market in Lost Wages. At one point in one (very large) showroom I looked up and I literally could not see the floor for the buyers. Let's hope it bodes well for the economy.

While in Vegas, Mr. Blog Appetit and I played blackjack for about a half hour on $20 total, which I thought was pretty amazing. We ate in one of the worst restaurants I've ever eaten at anywhere (a Southern comfort spot in Harrah's where even the chicken soup was inedible), saw a show (comedian Rita Rudner) at Harrah's which is why we were eating there to begin with. (By the way, she was very entertaining, but on the way home I watched a video of her in the airport where she was doing choice bits from her act. My new tip for freebies in Vegas -- watch all the comedians on the airport videos.) , had way too much steak and lots of seafood. Vegas will get it's own write up soon.

What have I been cooking? Well, this past week I've been under the weather and a scrambled egg and microwaved water has been about it. The week before that I was in Vegas. Before that, however, do I have dishes to dish -- from goulash to doro wat. And a new piece of kitchen equipment to rhapsodize about (A Rhapsody in Blue). Watch this space.

On the Road to China. I'm off in less than two weeks to China, including a cooking class in Shanghai, a meal in a local home near Beijing and more. I usually don't post while I'm on the road, but I will be taking pictures and notes, so more on China when I return in March.

How Sweet it Was -- Local See's Candies Store Closes Unexpectedly. It was one of the last "neighborhood" style stores I knew of around here, the rest are in malls. One of the oldest stores in the See's chain, it had a quaint art deco charm. The signage and candy maybe gone and the for lease sign up, but I bet the place still smells of chocolate. The community staged on uprising when the store's closing was proposed four years ago and the location was kept open. This time there was no warning, just a sign in the window one morning. Also, I noticed the See's in my mall of choice has moved to a more out-of-the way, smaller location. I guess even See's Candies needs to tighten its belt in this business climate despite being owned by Berkshire-Hathaway. Memo to Warren Buffett -- Save My See's! (For more on See's Candies including links to my reviews and calorie counts, click here.)
Posted by FJKramer at 8:24 AM

I really enjoy visiting your site. The food blog world is a great opportunity to induldge in so many cuisines. Hope this comment doesn't get lost but I have also tagged you to participate in a new meme called "Tag" You're It. I invite you to see my site for info on this event and to find out 5 things about me.

Thanks Sylvie for my very first "tag" and for being a regular reader and saying such nice things about B.A.