Korean on a Plate and From the Store -- Spicy Chicken, Potato and Spinach Stew 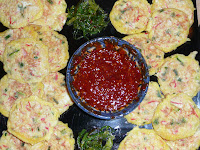 To say I enjoy exploring ethnic markets is a serious understatement. I love to spelunk the racks of unfamiliar spices, marvel at the vaguely other-worldly produce, climb over piles of not-quite-sure-how-you-use-it cookware and generally try to stuff myself with the food and experiences of another country's cuisine. An ethnic cookbook is always a good guide, especially if there are phonetic or foreign language spellings I can show a helpful clerk. An even better guide is a native eater and cook to help translate the experience for me, recommend products and brands and share recipes.

A few months ago I was driving down Telegraph Avenue in Oakland CA headed somewhere else (I think I was headed toward Whole Foods) when I spotted Koreana Plaza. I made a quick u-turn, parked and entered ethnic market nirvana. The first impression was the scent of sesame oil, garlic and soy. It was heavenly. Then I noticed the aisles of hot and cold prepared foods, a bakery counter, fish market, produce store, frozen delicacies and lots and lots of dried and canned Korean, Japanese and Chinese speciality products were there. There was even a whole aisle of red pepper paste, red pepper flakes, ground red pepper, red pepper threads and other incendiary versions of that spicy capsicum. (I may have been hallucinating because the next time I went it really wasn't a whole aisle.) Plus an entire, separate building of Korean house and kitchen wares.

I was shopping for a Super Bowl party and quickly abandoned my vague plans of fresh veggies and dips for a Korean feast. I bought everything from the ready-to-eat counter. To be honest I wasn't really sure what I was buying but I just dug right in for the adventure. The hit of the appetizers I set out was with the crab pancakes or fritters you see in the photo above.

While I've always enjoyed Korean food, I've never really tried to cook it and didn't even own a dedicated cookbook on the cuisine (quite a feat when you have as many cookbooks as I do). I began some research and have begun exploring more of the store and cuisine. A Korean friend while not exactly dismissive of the store tells me if I think Koreana Plaza is amazing I should see the Korean grocery stores in Los Angeles. My response to her -- when can we go? 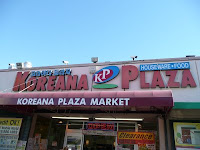 For the joint birthdays of one of our best friends who is like an aunt to our sons and our youngest son we had a Korean feast. It was a weekday and I didn't have much time so I picked up the appetizers and all the banchan (sometimes spelled panchan), or little side dishes or salads, pre-made at Koreana Plaza. These included a seaweed salad, seasoned black beans, a mung bean sprouts dish, pickled radish, napa cabbage kimchi, Japanese cucumber kimchi, pickled garlic, garlic stem kimchi and more. For appetizers I picked up a kind of Korean sushi made with fish cakes and the little crab crepes that were a hit at the Super Bowl party. I also made some fresh soy beans to munch on and had some Japanese rice crackers.

To serve with all those side dishes, I grilled the pre-marinated beef short ribs ($5.99 a pound) I had gotten from Koreana Plaza. They were juicy, tasty and irresistible. I also made a vegetable and fresh rice noodle dish, white rice, cucumber salad (which I kept on the bland side for those who don't relish setting their palette on fire with all the red pepper taste I had going in the meal) and a Korean-inspired Spicy Chicken, Potato and Spinach Stew.

While I had green tea with roasted barley (a Korean standby), the adults stuck to red wine or sake, the kids grape or mango juice.

Here's the recipe for the stew. Watch for more Korean-inspired food as I continue exploring Koreana Plaza and other Korean resources in the San Francisco Bay area.

This recipe was inspired by the recipe for Stewed Chicken With Potatoes in Dok Suni: Recipes from My Mother's Korean Kitchen by Jenny Kwak. My copy of the book was borrowed from the Oakland (CA) Public Library. Exploring the ethnic cookbooks from the library has always been one of my favorite ways to get up to plan my "trip" to a new cuisine.

This stew is spicy, true, but not the burn your lips and leave you sputtering kind of spicy. The broth kind of excites the taste buds and gives a gentle burn in the back of throat. Feel free to adjust the seasoning to your taste. The combination of pepper, garlic, sesame oil, sesame seeds and soy sauce is unbeatable. This makes a very soupy stew. Serve it in a bowl, with rice if you would like.

Put the cooking oil in a large, deep skillet or in a large soup pot. Heat to medium high and add onions and saute until golden. Add garlic and saute until lightly brown. Add chicken, skin side down. Brown top and bottom. (Work in batches if needed). Add potatoes, red pepper flakes, sugar, soy sauce, wine and sesame oil. Mix well. Saute for a minute or two to blend flavors. Add water, stir well to combine. Cover and cook about 20-30 minutes over a medium heat.

Periodically check and add more water if needed. When the chicken is almost cooked through and the potatoes are tender, stir in the spinach. Cover and cook until the chicken and spinach are done, then taste and correct the seasoning with the salt if needed. Add in the sliced green onions. Stir well and cook until the onions are wilted, (about 2-3 minutes). Remove stew from the heat and transfer to a serving bowl if desired. Sprinkle with the sesame seeds.

By the way, I started preparing this whole meal at 4:30 and was ready for company at 6:30, mostly thanks to the prepared foods I picked up at Koreana Plaza. In addition to the Oakland location, the store has another location outside Sacramento, CA. Check the website for more info.
Posted by FJKramer at 5:21 PM

That sounds absolutely wonderful! I wonder though - did you remove the bones from the chicken before serviing it? How does one eat bone-in chicken from stew?

I didn't remove the bones, although the meat was very tender and just about falling off the bone.

for reheating leftovers, I did debone the chicken and put it back into the stew

You could do that before serving the first time if you are so inclined.

I do think chicken is more flavorful when cooked on the bone.