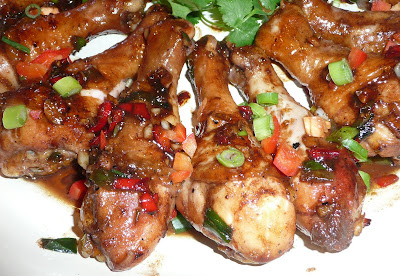 I always have the best of intentions when I plan to review cookbooks. But somehow my wanting to really read the book, try some recipes and just do a thorough job of it ends up with the actual review getting further and further away from being completed.

So to make up for this I’ve decided to do capsule reviews of two books I’ve been meaning to get around posting about on Blog Appetit. Watch for other capsule reviews as I try to get caught up a bit with the flood of cookbooks around here.

The Steamy Kitchen by Jaden Hair --- Like many cookbooks written by bloggers, this one brims with details, asides, stories behind the recipes, personal information and more. By the time you’ve cooked a few of the dishes and read a few of the notes you feel like an old family friend (a feeling that Jaden gives you when you meet her in person, too). The photographs of Jaden, her family and the food (mostly taken by Jaden herself) are beautiful. The recipes are all Asian or inspired by Asian ingredients or techniques. I’ve tried three of the recipes. The Baked Garlic Chilli Wings were outstanding. I made it twice (once with drumsticks) to bring to parties and they were devoured both times. Another, a Brussels sprouts dish stir fried with fish sauce, was also impressive. A third recipe produced a dish that was fine, but not seasoned enough for my taste. If I had not been testing it for a review I would have added more seasoning.

What most impressed me throughout the book were the clear instructions and the thoughtful use of Asian ingredients. Techniques were not necessarily simplified as much as made easy to follow. Dishes that may have called for unfamiliar ingredients were not shied away from and, where appropriate, logical alternatives were offered (such as balsamic vinegar for the fish sauce in the Brussels sprouts recipe). To Jaden, these are everyday ways to cook and she makes sure you feel the same way about it. (Here’s a link to the recipe for the Baked Garlic Chilli Wings from a Miami FL newspaper.)

I’d recommend this to cooks who are just beginning to explore the wonderful world of Asian flavors or for fans of Jaden’s popular blog, Steamy Kitchen.

Disclaimer: I was supposed to have gotten a free copy, but didn’t (long story, but it was my fault, I didn’t follow up). A friend loaned me her copy which I hung on to way too long because I enjoyed reading and using the book.

Pioneer Woman Cooks by Ree Drummond.  Ree, another extremely popular blogger/photographer, has also written a book that gives you not only a good feel for her life and cooking, but also her roles as a ranch wife, parent, teacher (she homeschools her four children). It features a darn good love story, too. It has the same welcoming feel as her Pioneer Woman Cooks blog. No wonder it is rumored that her story has been bought by Hollywood and might star Reese Witherspoon.  I’ve met the real Ree Drummond though, and I think she should play herself; she’s beautiful and engaging. Ree’s recipes are straight forward and lean toward comfort foods. She specializes in step-by-step photography to complement the recipes’ directions.

I haven’t had a chance to cook out of the book yet, but those bloggers who have have given the recipes raves. I particularly have heard great things about her biscuits, meatballs and chili. I look forward to trying those as well as some of the others in the book (especially her French Breakfast Puffs which might go well with the New Orleans coffee with chicory I just bought).  Here is Ree’s recipe for biscuits (and gravy).

Going to Ree’s blog is like going to a multiplex, there are so many choices you might not be able to decide which one to choose – personal essays, recipes, a reader forum, photography tutorial and more. But whichever one you do you'll enjoy.
Disclaimer: I received a free copy of this book from Ree and the publisher.

Email ThisBlogThis!Share to TwitterShare to FacebookShare to Pinterest
Labels: Cookbooks

Thank you so much!!! xoxo jaden