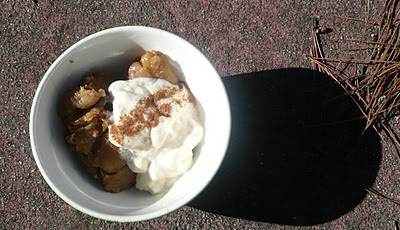 I've written before about the gift of the bag of apples from our friends the Gombergs.  The bounty they shared (it must have been more than 25 pounds) was astounding and I had several reactions.  The first was gratitude. I was so delighted that they thought to give us some. The next was a personal challenge -- how many ways I could I use the fruit and what recipes could I create.  The last and most surprising was the memory the apples stirred.

It is not even a real memory or my own memory. It is a memory of mother's.  She once told me that when I was about two she, dad, my grandparents and I went to an apple orchard in upstate New York.  Supposedly, I lifted up a full bushel of apples and hoisted it in the air. Perhaps I even walked a few steps with it.  There are no photos of me doing this, only this hazy memory from my mom, my memories of her in danger of going wispy around the edges as she left us much too young with her mind and senses slowly fogged by disease and dementia.

In my mind's eye it is a breezy but warm day.  The trees around us are filled with Macintoshes, the favored apple of my New York youth.  A small, dark-haired girl in a short white dress with browned arms and legs is lifting a bushel basket full of the apples up into the air, surprised at the attention the adults she loves are giving her for such a simple thing.  She is only trying to help. The basket, probably almost as big as her, is loosely woven out of thin slats of shaped wood and is worn and well used with bits of scuffed green and red paint in spots. The handles cut into the toddler's pump hands.  She takes a few steps towards the adults. Someone reaches to take the basket from her and she plops down on the ground as the weight suddenly shifts.  Before she can cry or even laugh as the grass tickles her thighs, her mom scoops her up and hands her an apple.﻿

I can see it so well, it is like it is a snapshot in my mind but it isn't. It is only a story I heard once from my mother who used it as an example of how strong I was as a baby.   Everyone else in that scene is gone now, there is no way to corroborate or color in more details or correct wrong impressions.  I think I prefer it that way.  The story of being strong, being independent and wanting to help others has become part of my definition of myself.  When I think of my re-imagined memory and feel the swoop of feeling for my mother, young and slim, I remember how in kindergarten,  I used to feel sorry for other kids in my class that they did not have a mother like her.  She made me feel like I was the apple of her eye.

Serves 4-6
The apples in this sauce retain their shape and just receive a slight mashing.  If you want a more traditional texture, peel the apples before cooking or put the cooked apples through a ricer or food mill.
By "warm spices" I mean that to me the spices in this recipe (which were inspired by a gift from the McCormick at BlogHer Food 2010 of jars of McCormick's roasted coriander, ginger, cumin and cinnamon) have an essential warming essence.  To substitute for the McCormick products, pan toast the seasonings in a small, hot, dry fry pan for about 20-30 seconds, stirring constantly, until the aroma is released.

The result of the roasting and spicing is a complex, not too sweet apple sauce that works well as a snack or dessert (topped with yogurt or whipped cream and a dash of cinnamon) or as a side dish for grilled or roasted meats or poultry or even a savory bean stew.
The Gombergs gifted us with apples of the Beverly Hills variety, which have a yellow-green skin and are slightly tart.  Pippins or Gravensteins would make a good substitute.

Preheat oven to 350 degrees.  Grease a 10"x14" baking pan, set aside. In a large bowl, toss the apples with the apple cider vinegar, and then mix with the coriander, cumin, ginger and cinnamon.  Place in prepared pan and put in the oven. Bake uncovered for about 1/2 hour, stirring occasionally.  Cover with aluminum foil, stirring occasionally and bake until the apples are tender (about 1 hour or so more, timing will vary.) Mash lightly.  Taste, add sugar to taste if desired.
---------------------------
For other recipes featuring the Gombergs' apples see:
Apple and Cranberry Pie with Granola Streusel

For a collection of other recipes featuring apples, click here -- including baked, salads, candied and caramel.
Posted by FJKramer at 10:44 PM

Your Macintosh apple story is sweet and crisp, touching but not not mushy, just as a perfect apple and perfect story should be. Lovely.

Kate,
Thanks for the poetic wordplay and lovely comment!
F

She made me feel like I was the apple of her eye. I'll bet you were smiling when you wrote that. Good line, great story.

Reading the recipe I'm thinking a bit of clove might be a nice addition, too. With the cumin and coriander you'd be on the way to a garam masala - so you could just use that & make this an Indian-style recipe. Or maybe not? Anyway, enjoyed all your recent apple recipes. Thanks.

Kitchen Riff - clove might work well, but it wasn't part of my original idea, probably because I had just made the apple-cranberry pie with clove and wanted to change up the flavor profile.

Thanks for your support and comments.