A Carrot Cake for Mark -- A Remembrance and A Recipe 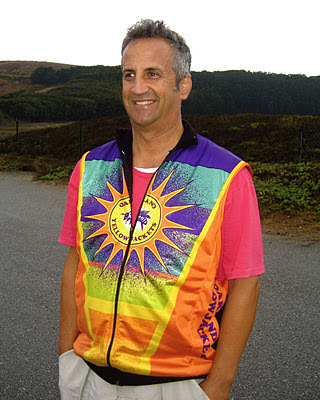 Today would be my good friend Mark Rutta’s 59th birthday. Mark passed away from a massive heart attack on April 16th so we won’t get to celebrate this birthday with him or anything else. That’s not the way it was supposed to be. We were supposed to grow old with Mark, cherishing his friendship, support and loyalty, chuckling at his foibles and occasional misadventures, appreciating his help with everything from choosing electronics and troubleshooting sound systems to dropping you off at the airport at 5 a.m. in the morning.

Instead of sharing his favorite carrot cake with him today, we – his sister, partner, family and friends – are still processing his death. This is not how it was supposed to be.

Mostly I am still angry that he is gone. I think many of us are. Mark met my husband, Gary, in college, and later they were roommates. He was one of the best men at our wedding. We’d call him to join us for dinner when I made too much or something special we wanted to share. He loved to hold our babies, never minding if they cried. He wouldn’t pass the screaming infant back to us; he just figured the child needed to cry and that was part of the experience of holding him. He babysat for my toddler son so we could go to Lamaze classes before the birth of my younger one. He was a beaming uncle as they grew up, taking time to really get to know each one. He was there for us during the good times and the bad no matter what else was happening in his life.

I like to think we were there for him, giving him support, guidance, love and friendship, but I don’t think we could ever accept him as unconditionally as he accepted us. That was really a gift. He was never critical, never impatient, never judgmental. How we are and how we wanted to be were one in the same to him. Knowing Mark made me a better person because, well, because that’s how he saw me.

I – we – feel so cheated that he left us just when he had found in Karen a life partner and when we felt we had years to have Mark’s companionship and love to savor. Mark died during a bike ride, a sport he dearly loved. Some sought to ease our souls by remarking that at least he died doing something that he loved, but, too me, that was scant comfort. Art, another ex-roommate, close friend and the other best man at our wedding, put it best at the memorial service.

“I rather Mark lived a long live and died doing something he hated,” Art said. “That way we’d still have him in our lives.”

Part of me still can’t believe I can’t invite Mark to dinner or see if he wants to go to a movie or concert or just call him up to talk. Every time I walk on the street where he used to work, see his photo or have a random memory of him, my eyes still tear up, my throat begins to ache and I feel the loss all over again. I guess I’m still sad. But I’m also so angry. Maybe in time I won’t be sad, won’t be angry, won’t feel cheated, but certain things will always be true. I’ll always love him, value the time we had and miss him.

Happy Birthday Mark. I love you. 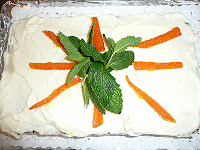 About the carrot cake:

Mark didn’t cook many things, but the recipes he made he made well and often. He was famous for his carrot cake and justifiably proud of it. The recipe originated with his sister, Elaine. Mark would make it for his birthday, other’s birthdays, potlucks, office parties, pretty much whenever he felt it was appropriate or requested. It has become the standard all other carrot cakes must meet for quite a number of people. The recipe was even included on his memorial program.

After he passed, his sister, partner and the friends all agreed we need to make the cake for the reception after the memorial service. I not just volunteered, but pretty much demanded that I be the one to make that cake, but everyone asked me to please lighten it up and make it less sweet. I don’t know if we couldn’t bear to have Mark’s exact carrot cake without Mark or if we had all grown older and our taste buds, waistlines and cholesterol levels had changed and we needed the cake to change with them. Below is my adaptation of Mark’s carrot cake. If you make it, please don’t forget to season it with love, kindness, friendship, loyalty and a smidgen of amused exasperation. And share it with someone special.

A Carrot Cake for Mark
Serves a Lifetime of Friends

To know Mark was to eat his carrot cake. Here is a version of it. The original in his sister Elaine’s handwriting is in the photo below. 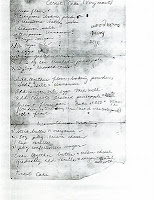 Add carrots, drained crushed pineapple and nuts. Mix well. Pour into prepared pan and bake for 50-60 minutes or until cake is firm to the touch and a toothpick comes out clean. Cool and serve from the pan if desired.

The cake is delicious without this frosting, but Mark traditionally served the cake with it. Be sure the cake is completely cool before frosting. Mark's recipe calls for the full pound of sugar.  I've found the recipe works fine with half that amount.

Have butter and cream cheese at room temperature. Cream together, gradually adding vanilla and sugar until smooth.

Email ThisBlogThis!Share to TwitterShare to FacebookShare to Pinterest
Labels: Desserts, My Life

I'm going to make the cake in honor of him (also because it's the classic recipe I love). He sounded like a great guy with the kind of friends and live we should all have. Thanks for sharing.

Dear Annette and Susie,
Thanks.
Mark's carrot cake (he always made the one you can see in the jpg (click on the photo to see it), really was so special.

Reading this brought tears to my eyes. I agree that I would rather have those I love live longer and die doing something they hate. It does sound like a good cake.

Thanks for taking the time to let me know. It was just my birthday and I so missed celebrating it with Mark, who would have probably made me a carrot cake, bought me a thoughtful present (usually a cookbook) and made sure I had a special day.