Chicken Soup 101: From Bird to Broth

Chicken soup is more than a recipe and eating it is more than an act of physical sustenance.  It’s almost religious for it is representative of a lifestyle enriched by food symbolism and at-home, meal-based traditions and celebrations.  From Shabbat dinner to the High Holiday table to Passover and beyond a bowl of rich, fragrant golden broth has become a defining part of the Jewish lifestyle whether it is served with homemade noodles, rice and lemon juice, matzo balls, kreplach, liver dumplings, Italian chicken meatballs or Iranian gondi, dumplings of chickpea flour and chicken.

(For a vegetarian substitute, see My Not Chicken Soup recipe.)

In Biblical times soup was made in earthenware pots from vegetables and lentils and flavored with onion and garlic.  It was called marak in Hebrew –a name that survives today in the Yemenite marak which is a beef or chicken soup and in marag, the traditional soup for Jews of Calcutta.

Chicken broth has only been made for the past several thousand years. At first it was served for its restorative, medicinal affects (which Maimonides and later science has since supported.)  Chicken soup was part of the Mizrahi (Middle and Near Eastern) and Sephardic culinary experience at least since the early medieval period, long before it entered Ashkenazi cookery, but it was among the Eastern Europeans and their American descendants that it found its greatest appreciation as a traditional Friday night dinner starter.

Chickens were domesticated in India 45,000 years ago and spread widely as the Romans, Persians and Greeks were fans of cockfighting.   Romans were also fond of eating the fowl and in ancient Rome they became a feature in Jewish cooking.  With the fall of the Empire the taste for the bird declined.  Not until the 12th century did they become widely eaten again, mostly because of meat shortages.

For central European Jews, the goose was the bird of choice.  Raising geese was an important source of income for Jews there, but in Eastern Europe Jews favored the easier and cheaper to raise chicken.  In the Sephardic world and elsewhere it was not as much of a staple since it was a more expensive form of protein.

Every cook has their own recipe and technique for making chicken soup.  Many of mine are reflected in the recipe that accompanies this post. I prefer to use a whole chicken instead of just pounds of parts.  I use lots of root vegetables to give the soup a deep flavor and add ginger to compliment the richness of the broth.  Sometimes I will add a few tablespoons of lemon juice to the finished soup before serving.  Mostly, I am always conscious that I am making soup, which needs to stand on its own, not stock, which will be enriched by other ingredients. I also don’t let the soup come to a full boil at any stage.  That’s how I was taught and I do think it results in a chicken soup with superior taste and color.

Others have their own tips.  Some add chicken bouillon cubes to enrich the broth.  Karen Bloom’s grandmother disclosed on her deathbed that her secret was adding a can of chicken stock to her broth. (If you try either of these tips, add salt after tasting because of the sodium in the canned stock and bouillon.)  I know at least one cook who adds beef bones to her pot for extra flavor.

Judy Bloomfield swears by adding celery root (celeriac) to the soup pot. Carol Robinson’s grandmother advised parsley root was the secret ingredient. (Parsley root looks like a parsnip but the flavor is different.)  Roz Aronson adds some fresh lemon juice or ginger and like many of us garnishes her soup with fresh dill. 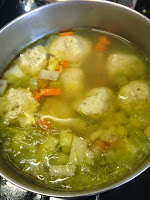 My recipe will make enough to for about eight or more servings depending on add ins, serving size and appetites. I’ve broken the recipe down into steps so I can explain what I do and why I do it, but the recipe is really pretty straightforward.   I’ve given exact measurements, but feel free to vary.  I like the peppery sharpness the turnip gives the soup.  Leave it out if it is not to your taste.

My aim is to make a deeply flavored, golden chicken soup with a full taste and a satisfying texture and mouth feel.

If you don’t need soup for eight, freeze some of the plain soup broth for future use and defrost as needed.  It stays well for months and works as soup or as a rich chicken stock.

Part One:  Making the Soup

Start the day before if possible.

Remove internal organs and any excess fat from inside of chicken and discard. (Save the neck if available and add to the pot with chicken.)  Be sure all little bits of deep red tissue are removed from inside the chicken (they can turn a broth bitter).  Rinse chicken inside and out.  Place chicken in a large, deep soup pot.  Add water.  Leave uncovered and put on medium heat and begin to bring to a simmer.  Meanwhile prepare the vegetables.  Do not peel the carrots, parsnip, onion and turnip.  Scrub well and trim root and stem ends, then cut into 1” chunks and add to soup pot.  Wash and trim celery, leaving leaves on, and cut into 1” chunks and add to pot along with the whole garlic cloves and ginger root.  Trim roots and deep green ends off leek.  Cut in half lengthwise and rinse well to remove any sand or soil.  Cut halves into 1” pieces and add to pot with parsley, bay leaves, peppercorns and salt.  Bring back to a simmer.  Crumble saffron into water.  (Saffron helps give the soup a golden color.) Cover and keep at a simmer lowering heat if necessary, but don’t let it come to a rapid boil.

Simmer for about three hours, stirring occasionally and skimming off and discarding any foam that might form a scum at the top of the pot.  Cook until the chicken is falling off the bone, the vegetables are very soft and the broth tastes rich and full of flavor.  Add additional salt and ground black pepper to taste as needed.  Let cool until safe to handle.  Strain or sieve the soup into a large container. (I ladle soup through a strainer, press on the solids to get out any liquid and put solids in a separate bowl.)  Taste the chicken meat.  If it still has good texture and flavor keep to serve with the soup.  If it is tasteless, dry, stringy or cottony, discard.  Discard soup pot vegetables.

Here are some serving suggestions, but your soup is your canvas.

Remove soup from refrigerator.  Skim off fat as desired.  (I find that leaving some fat makes a better soup.  This recipe generally does not produce a lot of fat so I usually don’t skim it off, but do so if it is your preference.)  Place in soup pot, put on medium heat and bring to a simmer (do not let it come to a rapid boil). Taste and add more salt and pepper if needed.  If using, add cooked vegetables, matzo balls, rice or noodles and shredded chicken.  Keep at simmer until add ins are heated through.  Serve in bowls topped with dill.

Chopped Vegetables:  Scrub, peel and chop into 1/4" pieces 1 medium parsnip, 3 medium carrots, and 1 large turnip. Trim root end and dark green part of 1 large leek.  Cut in half and rinse out any sand. Chop into 1/4” pieces. Trim 2 large celery stalks and chop into 1/4" pieces.  Combine in pot with salt and pepper to taste and cook in about 2 cups water or chicken broth until just tender.

Cooked, Shredded Chicken:  If the soup pot chicken is not usable, poach 1 lb. boneless, skinless chicken thighs with salt and pepper to taste in chicken broth or water until cooked through.  Cool and shred. If using soup pot chicken, discard skin and bones and shred.

If soup is too salty, cut a large, scrubbed, unpeeled potato in half and simmer in the strained broth until soft and discard.  It should absorb the excess salt.  Repeat if necessary.

If soup is not “chickeny” enough, poach about 1 lb. boneless, skinless chicken thighs in strained, simmering soup until cooked through.  Remove thighs and save to serve with soup or for another use. Taste and adjust seasonings. Strain soup again before proceeding.  If the broth is only slightly watery tasting, try simmering strained stock with cover off until it soup is reduced somewhat and taste is intensified.

If soup needs “something” and you don’t want to add more salt or pepper, try stirring in a tablespoon of fresh lemon juice. Taste and add more as needed.

If the soup is not “golden” enough, try adding 1/4 tsp. of turmeric to the simmering, strained soup.
Posted by FJKramer at 10:27 PM