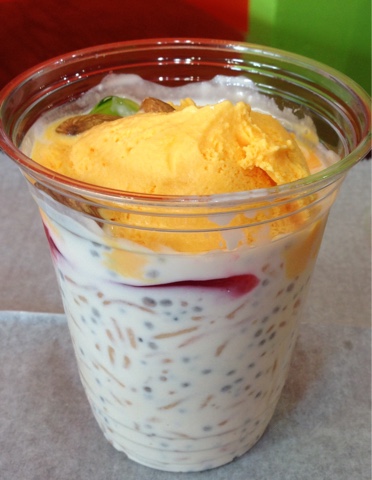 Falooda is a thin, sweet noodle added to frozen desserts and drinks. I first had it in a Persian rose ice cream here in the states. I next had it as a sundae in Jaipur, India, served with ice cream and rose syrup. Today's was from a snack stand on West Devon Avenue in Chicago, which is part of an area becoming known as the International Marketplace because of the wide range of food stuffs and international restaurants and stores.
The area around Devon and Western avenues is heavily Indian and Pakistani, but as we walked along we saw Middle Eastern, Near Eastern, Georgian, Eastern Eurporean, kosher, and Latin American influences.  The Indo-Pakistani offerings ranged from curries and kebabs to Indo-Chinese food (spicy and saucy) to vegetarian dosas (rice flour crepes) as well as snack foods such as samosas (filled pastries), chaat (assorted snacks) to the falooda.  This one had the noodles, flavored jellies, a kind of tapioca pudding, mango ice cream, a few whole almonds, and syrup. It was rich, satisfying, more than enough for the two of us and cost just $2.99.
Devon Avenue is also home to Indian and Pakistani clothing and fabric stores (think saris and other traditional outfits), jewelry stores, housewares stores and religious items dealers.  There are also a far number of dollar and value-priced merchants as well as food markets and restaurants.
One important note: Some of the clothing stores and a few of the restaurants and other stores are closed on Tuesday, but if that is the only day you can go there are still an overwhelming number of places to check out.
It is accessible by bus or by taking the Red Line train to Loyala and catching the 155 bus.
Posted by FJKramer at 8:56 PM

Email ThisBlogThis!Share to TwitterShare to FacebookShare to Pinterest
Labels: Chicago