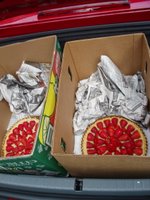 What happens when you get four friends and one hot recipe together?
You get a lesson in pie crusts, almond cream filling, lemon curd, new cars, teenagers and semi-precious jewelry.

Maureen, Laurie and Teresa envied me my easy, no fuss pie crust, which I learned in Paris last May at the cooking school of Paule Caillat.
(See http://www.promenadesgourmandes.com/ for more information.)
I debuted my latest Paris fashion at a mutual friend's Memorial Day barbecue. Laurie, in particular, has been anxious to mix it up since then.

So after much schedule juggling, we finally got together the other day at my house. I supplied the nine-inch tart pans, the imported French butter, the French roast coffee and the pastry treats. They brought a lot of enthusiasm and a new cookbook as a pre-thank you present.

After discussing the new car, husbands, kids and the jewelry, we finally got down to business by starting with lemon curd. Personally, I agree with Laurie, a good lemon pie is even better than (dare I say it) the ch-word. I don't believe such goodness can come out of a can, bottle or pudding box, and my friends would have to feel the burn of hand whisking the lemon nectar over an improvised double boiler until it turned into custardy bliss.

While the lemon curd cooled and congealed in the fridge under its plastic wrap skin, we went to work on the uncursed crusts. These require no rolling, no crumbling of butter and flour between your fingers while you try to convince yourself pea size really means the size of an overgrown edamame.

We went to work on the almond cream filling after our crusts were patted into place in the tart pans. One of our three crusts was sacrificed to the lemon pie so one crust was fully baked until golden with edges just beginning to brown. After it cooled the lemon curd was ladled on, smoothed out and zealously guarded from eager tasters to be topped at home by the lucky baker with red, ripe strawberries.

After a 14 minute bake in the old Viking, the other two crusts were ready to pull out of the oven to be filled with the almond, butter, egg, sugar and rum filling. They baked for about 25 minutes more until the filling was set and puffy. After oohing and aahing and a discussion about our general sense of self-satisfaction, sliced strawberries were inserted on top of these open-faced wonders, completing their transformation into true berry tarts.

The berry tarts were loaded in the back of a cherry red roadster, the lemon pie went home in its less colorful but equally able conveyance and plans were made for the next cooking session. Something about spring rolls. I think I said yes.

Almond Tart with Berries
A special thanks to Paule Caillat, who gave me permission to use her recipes.
This is a very adult tasting tart, not too sweet, with lots of flavor. You can also use the tart shell with other fillings. I have used it with a lemon curd filling and Paule, whose family originated this tart, spoke of having made it with a chocolate ganache filling as well. For 6-8 servings

Please note: your butter must be French or European style and unsalted. These butters are available at specialty supermarkets and sometimes at Trader Joe's. Regular American butters such as Land of Lakes or Challenge (although I haven't tried Challenge's European style) have too high a water content and the crust shrinks and cracks too much when baked.

In a large, microwave-safe bowl combine the butter, oil, water, sugar and salt. Melt together in a microwave until the ingredients are well melted and mixture is close to a boil. I recommend covering the bowl with waxed paper or a vented top to avoid splatter. If the butter is cold or frozen it would take longer. (I have used frozen butter, but I cut it up into smaller pieces.)

Remove bowl from microwave. Be very careful, the ingredients will be very hot.

Add flour by tablespoons to the butter mixture and stir with a fork. Keep adding and stirring until the mixture forms a ball. Keep adding flour until the dough no longer sticks to the sides of the bowl. It should not look wet or slick or greasy and have some resistance to your touch, almost like squeezing your earlobe, but still keep together and not crumble.
Press the dough into the ungreased tart pan. Make sure you cover the bottom and sides evenly. Pierce the bottom all over with a fork and press the back of the fork tines against the sides of the tart. Place the tart pan on a baking tray.

Bake at 410 degrees for 10 or 15 minutes. The crust should look lightly browned and show fine cracks.) If you are making a recipe that needs a completely baked crust, bake for additional time until golden overall and the edges have begun to brown.

100 grams of unsalted butter, softened. (That's about a half cup of butter. American style will work here, but I find that European butter is conveniently sold in sticks of 199 grams, so there is enough for both crust and filling and a small pat leftover.)
Half cup (100 grams) sugar
Half cup (100 grams) almond meal (also known as powdered almonds. If you try to make your own, used blanched almonds and grind it very fine and powdery without turning the mixture to nut butter.)
1 tablespoon flour
1 egg, beaten
1 tablespoon rum

In a bowl, mix the sugar with the powered almonds. Add the butter and thoroughly blend using fork, pastry blender or fingers until the mixture is evenly combined.
Add the egg, flour and the rum. Mix well.

Spread the almond cream evenly in the pre-baked tart shell.
Bake in the oven on baking tray for 20 minutes. The filling should be set and have risen up a bit. Cool a bit on a rack.
Wash, drain and remove stems on 1 pound of strawberries. If they are large, you may need to slice them in half or even quarters. Arrange berries on top of baked tart when it is just out of the oven, slightly sinking each berry piece into the almond filling
Let cool a few moments. Sprinkle with the confectioners' sugar (if using).
Remove outer tart ring and serve.
Posted by FJKramer at 1:59 PM