Hot Stuff at the Farm Stand 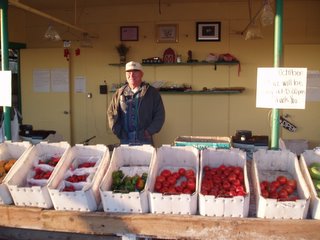 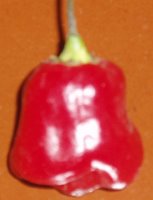 Just what the world needs, another hot sauce.
When we were driving back from a family vacation in Yosemite National Park, we stopped at Fisher Farms, in Ripon, California, absolutely one of the best farm stands in the world.

The owners of FF only sell seasonal produce they grow themselves at prices that make us city slickers drop our jaws. Their season starts in May with three different kinds of cherries, and continues through September with five kinds of apricots, 11 types of plums, 28 of peaches, 19 kinds of nectarines, as well as plentiful varieties of pluots, almonds, walnuts, grapes, apples, Asian pears, heirloom tomatoes and vegetables.

Since we were coming through in late October, the pickings were a little thin, but there were piles of tempting little baby bell peppers, supple looking jalapenos and cheery little red lantern-like peppers I’ve never seen before.

The red peppers turned out to be Caribbean reds, supposedly twice as hot as their incendiary orange cousin the habanero. (One source quoted 450,000 scovilles for the Caribbean red, 250,000 for the habanero. Burpees’ seed catalog just lists them as 12-alarm chiles.) We pirated away a big handful of these red devils and some of their (relatively) tamer cousins and drove away, already speculating what to do with our plunder.

Eventually, we decided on a hot sauce. So one night when Gary was out of town, Noah and I sterilized a few glass bottles (we had visions of our creation eating through the plastic Tupperware) and got to work.

We pureed the peppers with a few garlic cloves, put them in a pan with about a cup and a half of white vinegar and the juice of a lime and cooked them until the little bits of pepper were softened and our eyes were watering from the fumes despite my industrial strength hood fan. We then cooled, decanted and refrigerated. Then we waited for Gary to come home to try the stuff, we sure weren’t going to.

Noah and I also had fun naming our creation. Our winner: “Below the Belt Hot Sauce.”

The tasting report was that the sauce had moderate heat (I was a bit disappointed, I really wanted that baby to burn, but honestly Gary can really take it hot so our moderate could be your forest fire) and full, balanced flavor (which was exactly what I was aiming for). I used it in a vegetable recipe a few days and found it added a nice flavor but needed to use a good slug of it to add the heat. Next time, more Caribbean red, less bell! I’ll name that one Aargh, because it will make you walk the plank.

Update: 8.26.10 -- The sauce aged well and definitely got hotter the longer we kept it (we refrigerated the bottles) until it was quite hot. FYI - New post on Fisher Farm here.

Email ThisBlogThis!Share to TwitterShare to FacebookShare to Pinterest
Labels: Food Resources, Make It Home Made, Vegetables