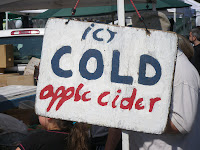 I love neighborhood and city festivals, but to be truthful many are starting to seem interchangeable. The Cherry Festival could be the Zucchini Festival except for the color scheme and the graphics. The same food vendors, often selling reheated or fried food, the same craft imports for sale, the same insurance, bank, wireless, real estate and roofing company giveaways and come ons. I miss a sense of place.

That's why when I hit a festival that has a there there, I am a sucker for it. No midways with games offering prizes of doubtful quality blow-up guitars or overstuffed bears for me. I take a chance on the ethnic and local food booths. The higher the quality and the more localized the food choices, the happier I am.

One of the best local festivals for this is the annual Berkeley, CA., Spice of Life Festival based on Shattuck Street, literally right in the heart of the famed "Gourmet Ghetto." I wasn't so much taking notes or taking note as I was just going from sizzle (barbecued oysters) to sizzle (grilled chicken sates and teriyakis ranging from the organic to the gigantic) and munching on every good thing that came my way from El Salvadorean pupusas to potato spinach knishes. From Italian peppers to burritos to corned beef sandwiches this festival had it all, even a mini-organic farmer's market. 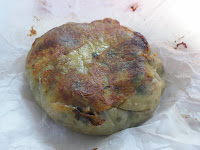 Besides the food, the festival offered all the gritty, quirky, political correct Berkeley attitude you could hope for. The real estate agents gave out reusable grocery bags, there were homeless just out side the festival area looking for handouts of leftover food or change, people were recruiting for volunteers and signatures to run Al Gore for president, massage therapists were doing a brisk business as were natural healers. Festival goers had a wide range of art, jewelry and other crafts to choose from. There was music, too, and cooking demonstrations. The one thing there wasn't was parking. Maybe the plan was for people to take transit, but instead the surrounding neighborhood filled up with cars. But perhaps that was okay if all those drivers circling and circling picked up a reusable grocery bag to help save the environment once they finally found a spot and walked to the fair.

Don't get me wrong, but a well-signed remote parking lot with a shuttle might have been a more realistic approach.
---------------------
About the photos. These came from the borrowed Olympus. I still don't have the ones from the Sony I also borrowed. I really like the Olympus except for its capturing anything with an intense red, it just isn't doing it for me.
Posted by FJKramer at 12:31 PM