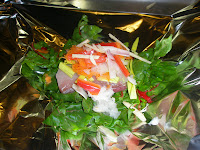 What inspired this dish? I’m not exactly sure. I had bought the fish to make a recipe for my son who decided not to eat at home that night, so I had it in the house. I had lots of odds and ends of vegetables and I have a pantry stocked with all sorts of ethnic ingredients so I can cook pretty much any style of cuisine on a whim. All day at work I started to build this recipe in my mind. I started with wanting to steam the fish in the packet, which is one of my favorite ways to cook fresh fish since you get clean, bright flavors and not much clean up, and with not having to go to the store for anything. Then I started playing with flavor profiles and imagining the contents of my fridge and pantry. The result was:

Take 8 long strips of aluminum foil. Double up. In the middle of each double strip, place a fourth of the torn chard leaves. Place a fish filet on top of that. Scatter one fourth each of the leek, ginger, lemongrass and minced garlic on each piece. Scatter one fourth of the turnip, carrot, green papaya (if using) and red bell pepper on top. Stir the soy sauce mixture. Sprinkle each vegetable-topped filet with 1 tsp of the soy sauce mixture and ¼ tsp of fish sauce. Scatter a bit of salt (careful the soy and fish sauces are salty, too) and grind a bit of fresh black pepper on top and seal each packet so cooking juices can’t escape (see notes). Place the four foil packets on a baking tray and put in the oven. Bake for about 20 minutes (see notes) or until fish is cooked.
While the fish is cooking, prepare the noodles according to package instructions. Drain. Stir the soy sauce mixture. Toss the noodles with just enough of the soy mixture to lightly coat (you might have dressing left over, use any leftover as a stir fry sauce for vegetables.)

Place noodles on plate, open foil packet and slide fish and vegetables on top of noodles and pour any cooking juices over fish and noodles.

Here are some tips on making foil packets. You could also use parchment paper for the steaming packets.

The timing of cooking the fish depends on the thickness of your filets. My ¾” filets took about 20 minutes. Adjust according to the thickness of your fish and be prepared to open one of the packets to check on the fish at some point. The fish will continue cooking in the foil packages until unwrapped, so if you are making them in advance of serving or holding them awhile before serving, slightly undercook the fish.

I had a leftover fish packet over noodles and greens drizzled with a few drops of the leftover soy mixture as a salad the next day for lunch. It was good, too.

I opted for the garlic and ginger taste to dominate. You could certainly add some spice to the dish by adding a ¼ tsp or so of Asian hot chili paste to the soy sauce mixture.

Fish sauce is widely available in some supermarkets, on line and in Asian grocers. Here is some background on it.

A green papaya is NOT an unripe regular papaya. It is available in Asian markets. My local Vietnamese market even carries it pre-shredded.
-------------------
On a personal note, so far this week I've made this dish, lamb tandori with vegetable korma (Indian) and Korean bbq beef ribs and stirfry broccoli (made with the leftover soy dressing from the fish recipe) -- see where a well-stocked pantry can take you!
--------------------------
I made a similar but simpler variation of this here.
This post is part of Sweetnick's weekly ARF roundup. I can't believe it is the 96th such roundup she's hosted. Here's the link.
Posted by FJKramer at 10:08 AM

Tomorrow night's seafood night and this sounds fantastic! Unfortunately I think a trip to the store will be in order...

I made this a while back with fresh caught striped bass and it was soooo good! Thanks!