I'm in a Magazine! 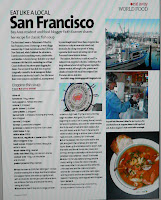 A few months ago a reader left me a comment to get in touch. She enjoyed my blog and wondered if I would like to write for a British food magazine. The result is in this month's issue of Olive Magazine, a food magazine published by the BBC.

Olive is available in the U.S., and it is one of my favorite reads, especially for its food travel articles. You can read more about my affection for British food magazines here. You can find Olive in the magazine sections of some larger chain and independent book stores.

The above is a photograph of the pdf I was sent. I participated in a series called "Eat Like a Local" and contributed the write up of my memories of cioppino, the recipe and and photos of the dish and San Francisco's Fisherman's Wharf. (My son took the photo of me buying the crab.) My article appears on page 111 of the January 2008 issue. (The January issue should still be available here in the States, although the website now features the February issue.)

It was a learning experience having to convert recipe measurements to metric and required some retesting to make sure everything would turn out okay. There were just a few minor word and recipe changes, for example the quantity of the chopped fennel fronds. I had specified 1 tsp. Olive's version advised readers to reserve the all fronds from the fennel and use them without giving a measurement. I'm hoping fennel is sold with very little frond attached in Great Britain!

It was also a learning experience to develop the recipe, writing and photos and send them off and not have final control over them. Everything had to be clear without being in the context of a personal blog. I had some severe word limitations, even for the recipe, and worked hard to make it all work within that context.

Many bloggers have that day dream of someone reading their posts and offering them a chance to write for a wider audience. Mine came true thanks to Olive Magazine.

Email ThisBlogThis!Share to TwitterShare to FacebookShare to Pinterest
Labels: Blog Appetit on Blog Appetit, Food Writing, My Life, See What I Wrote

Oh my gosh, how exciting Faith! Congrats on a great piece. :)

Congrats! What an honor!

Welcome to The Foodie Blogroll!

Thanks to all of you for your kind words. It is very exciting and I do hope to fit in more food writing into my life.

Also, thanks again to Olive for "discovering" me!

You are so right! That is so exciting- Congratulations on he extra exposure, it is quite an honor!