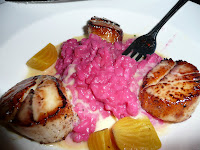 Birthday celebrations continued Friday night with dinner with Mr. Blog Appetit and the Future Pastry Chef at A Cote in the Rockridge district of Oakland, CA. The restaurant is one of my favorites, with some of the best fries (which we had) and mussels (which we skipped this time) around. It is also accessible by BART and in a great neighborhood for exploring.

I started out with a cocktail from the restaurant's very creative list. I chose one made with figuon, a fortified wine with figs, vanilla, and herbal and citrus flavors in it, mixed with lemon juice and vodka. I found it an intriguing and very satisfying and will be buying a bottle of my own as soon as I can.

For dinner, the FPC had chicken saltimbocca which I wasn't overly impressed by. Mr. BA had the short ribs, which I didn't try, with potato-turnip puree, which I did taste and totally approved of. I had the seared scallops, which I swooned over. They were warm and juicy inside, crusty and caramelized on the outside with the zing of black pepper throughout. I was less enamoured of the sides, especially an overly sweet beet risotto as well as a side of golden beets. (Note, the scallops were only $16, but there were also only three nice sized ones to a serving.)

Saturday night we had dinner with our ethnic food buddies, Mona and Vishu. We went to a Pakistani place with the most incredible food. I hope to do a whole post on Kabana (in Berkeley on University at San Pablo) sometime soon. If you are a fan of authentic Indo-Pakistani food, and don't mind a wait or the lack of ambiance in this almost a hole-in-the wall restaurant, I can't recommend it enough. 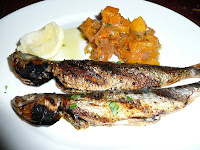 Sunday night, it was downtown (in downtown Berkeley, right near the BART station). Most of my friends had the halibut, which they loved, but Gary (aka Mr. BA) and I jumped at the chance to have fresh grilled sardines, which were very good. I especially liked the side of pumpkin and onions in what seemed to be an Italian sweet-sour saauce. The real hit of the evening for me was the artichoke. Served slightly fried (alla Romana), stuffed with garlic aoili and on a bed of Meyer lemon dressed greens, it was a wonderful combination of tastes and textures. The slice of prosciutto ham underneath it all didn't really seem incorporated into the dish but it was very tasty.

Monday night was New Year's Eve. We were no longer officially celebrating my birthday, but we partied on. I brought a tortilla espana to our event with a surprising ingredient -- Potato Chips. (A surprise in that it seems unusual and a surprise in that it worked so well.) More on that next time!
-----------------------------
Just a note: I don't do restaurant reviews for a variety of reasons. The main one is that I feel you need to have several visits and try many things and I don't usually meet my own criteria for that. I do write about my individual experiences, however, so please take into account these are just my opinions based on my limited exposure and not formal restaurant reviews.

About the photos: Scallop with beet risotto at A Cote and grilled sardines with pumpkin at downtown.
Posted by FJKramer at 6:03 PM