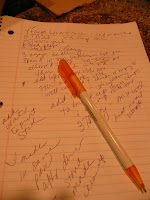 Below is my finalized shopping list for the week’s food (non-staples) with prices paid. I was able to take advantage of some phenomenal sales. For example $1.99 pound for boneless, skinless chicken thighs, 39 cents a pound for cabbage, four pounds of rice for $2.49 and a two gallons for the price of one deal on the milk. While these values vary from week to week, they represent what was out there while I was planning my menus. Most of the shopping was done at my neighborhood Safeway and Lucky’s, but items were also bought at Grocery Outlet and an independent supermarket.

Some Assumptions
The cost of staples (such as butter, canola oil, sugar, flour, etc.) made my tab higher than $84, but since I would only be using a fraction of those ingredients in my weekly menu I only counted the amount used for each meal. Because I tried to buy the smallest packages available, that did mean my per ounce price was less economical. In addition other ingredients would also probably last beyond the one week period such as peanut butter, but I included them entirely in the weekly total, although in my price per meal I figured out how much the ingredient cost for the ounces used. I did just count half of the cost of my eggs in the weekly total, since they were on sale -- two 18-egg packs for the price of one. (I included the other half in my staples accounting.) Since many households may have one or more of these ingredients in the house already, that would bring the shopping total down even further.