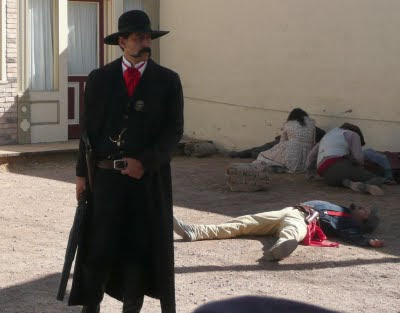 BANG. The sudden, loud boom of a shotgun and resulting acrid smell of gunpowder startled the crowd. We looked up and a man, dressed all in black with a long black coat and wide-brimmed black hat commanded our attention. He looked smug even without twirling the waxed ends of his handlebar mustache. He lowered his gun. He knew he had our attention. As the smoke cleared, Sheriff Virgil Earp informed the fanny-pack and flip-flop wearing tourists packed into rows of bleachers that for their own safety they were not to step beyond the paved walkway once the shootout at the OK Corral commenced.

Earlier, as I had walked the wooden sidewalks of Tombstone Arizona, gawking at the costumed shopkeepers and stagecoach drivers, the smell of grilling buffalo burgers focused my attention almost as suddenly and sharply as the sound of Earp’s weapon would later that day. I resisted their fast food allure at places such as Helldorado (home of a comedy gunfight and a silver-miner themed miniature golf course) and pretty much every other café this side of Toughnut Street. The smell of the grilled meat seemed to find me wherever I was in the town (which was equal parts private history museum and tourist trap). The scent was rich and inviting and reminiscent of campfires and cookouts. I was hungry and finally gave into temptation and ordered a grilled buffalo burger from a little outdoor vendor tucked between two of Tombstone’s innumerable former brothels and saloons.

As I waited the wafting smell conjured thoughts of cattle drives and chuck wagons as well as images of buffaloes home on the range (not to mention the thought of my patty grilling a few feet away from where I was sitting) and just made my burger lust stronger.

Six minutes after I ordered I had a perfectly cooked, medium rare buffalo burger on a nondescript bun on a thin paper plate. The burger was so perfectly formed it looked suspiciously like the frozen beef patties that come stacked in plastic bags at the warehouse stores. The bun was airy and tasteless. I took a nibble of just a bit of the unadorned burger before I ladled the condiments on. The buffalo burger itself was juicy without being fatty. It tasted like beef but not like beef at the same time. A rich, meaty taste but different. Buffalo meat has been described as a little sweeter than beef and while I don’t know if that’s how I’d describe the difference, there is one. The taste and texture reminded me very much of grass-feed beef. I liked it very much. Soon I had piled on onions, tomatoes, jalapeños, ketchup and barbecue sauce. Less than six minutes later, my buffalo burger was extinct.

On the drive back to our hotel in Tucson that day I already began to plan how I would make buffalo burgers when we got back to Oakland. Fresh meat, hand formed with maybe a secret ingredient or two on either a really good bun or on some thick sliced sourdough bread. I’d serve the burgers with sliced tomatoes and some avocado wedges. One the side I’d have some of my oven-roasted potato fries. Once I got home and corralled myself some ground buffalo (which I found in packages at my supermarket's meat counter) that's just what I did. 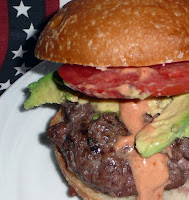 The Chipolte Adobo Sauce has a warm, smoky flavor that works well with the meat. I ended up drizzling it on my oven-roasted fries as well. Use it wherever you need a creamy, spicy sauce.

Be sure to warn dinners they are not biting into a beef burger. The buffalo meat does taste different and expecting beef and getting buffalo could be an issue for some. Buffalo meat does well in the medium rare to medium range. I don't recommend grilling the burgers any rarer or more well done. Watch your timing, buffalo meat is said to cook quicker than beef. Also, you may want to experiment with different brands. Whether your buffalo meat was grass or grain fed will make a difference to the flavor and texture. Grass fed is generally leaner.

2 tsps of adobo sauce from a can of chipolte peppers packed in adobo sauce (reserve rest of sauce and the peppers for another use)
1 tsp lime juice
3 tablespoons mayonnaise
1 pound ground buffalo meat
1/2 tsp salt
1/2 tsp ground black pepper
1/4 tsp chili powder
Sourdough rolls or other sturdy rolls or buns
Tomato slices, avocado wedges and other garnishes for serving

First make the sauce. In a small bowl mix the adobo sauce, lime juice and mayonnaise. Stir well and set aside.
Using your hands and being careful not to over handle, mix the meat with the salt, pepper and chili powder. Gently shape into three or four patties. Grill or broil until medium rare to medium throughout, turning occassionally. Let rest a few minutes and then put on buns slathered with the Chipolte Adobo Sauce and add garnishes of your choice.