Potluck Wonders with a Little Cheesecake (and a Tamale Pie Recipe) 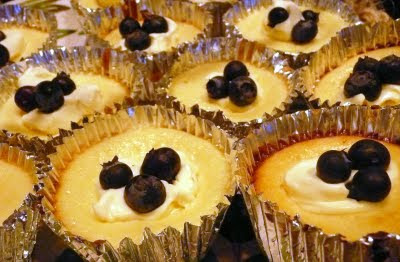 First a confession. Well, two. The first is that I love potlucks. Nothing strengthens my sense of belonging than the joyful eating of each other’s food, plus there is the satisfaction of feeding others and the delight of discovering how others make a similar dish or one unfamiliar to me. (Be sure to scroll past the recipe at the bottom of the post to see my digression about the meaning of potluck and more.)

The second confession is that I really don't have a photo of the recipe this post is featuring, a bean and vegetable tamale pie. While that really shouldn't matter, I've made a vow to try and avoid posts without photos. What could I do but do what newspapers and tabloids have done for years to get your attention -- throw in a little cheesecake. Or in this case little cheesecakes, since one of my favorite dessert offerings for potlucks, communal dinners, block parties, etc., are these cheesecake cups. These little beauties have lemon flavoring and are topped with mascarpone cream and fresh blueberries. You can find instructions and variations for them here.

The recipe below was featured in my column in the October issue of the Omer, the newsletter for Oakland's Temple Beth Abraham. It is a vegetarian tamale pie recipe that has evolved over the years and was inspired by a recipe in Moosewood Restaurant Low-Fat Favorites by the Moosewood Collective (Random House, 1996).

I first made the tamale casserole in 1999 for one of my sons’ religious school events. I have made it innumerable times over the years. My version makes a large “potluck” size, which means lots of leftovers if you are making it for a family dinner, or you can just cut quantities in half and bake in a smaller pan. Feel free to change out the vegetables, use pinto or kidney beans instead of black or leave out the cheese and/or avocado. Any way I’ve made it it’s always been delicious.

First make the vegetable and bean mixture. Add the oil to a large, deep sauté pan or a wide saucepan. Over medium heat, add the onions sauté until beginning to turn brown and soften. Add garlic and sauté until lightly golden. Add chili powder and oregano and the carrots, stir well. Add a tablespoon or two of water or vegetable stock if the pan is dry and the carrots are sticking. Cover and let cook for five minutes or until the carrots have begun to soften. Remove cover. Add the bell peppers, zucchini, greens, corn and jalapeno. Sauté until greens and vegetables are almost cooked through. Mix in the tomatoes (with liquid), beans and cilantro. Stir well. Cover and simmer for 10 minutes. Taste. Add salt and pepper and more chili powder if needed. Set aside.

Preheat oven to 400 degrees. Grease a large baking or lasagna pan or casserole dish. Evenly spread the vegetable mixture in the pan. Scatter avocado pieces on top and then layer the grated cheese. Set aside.

In a large bowl, thoroughly mix together cornmeal, flour, salt, baking powder and baking soda. In a second bowl mix the egg whites, milk and oil. Slowly pour the egg mixture into the cornmeal mixture, gently stirring together until just mixed. Pour on top of the contents in the prepared pan. Use a spatula to spread and even out the batter. Bake 35 minutes or until top is golden. To test if done, insert a knife into the cornbread topping. If it comes out clean, the tamale pie is done. Serve with the green onions, cilantro, sour cream, salsa and guacamole on the side
-------------------------------------------------------------
My digression .... A bit on potluck -- the word is thought to derive from the English (first reference in 1592) concept of sharing food from the cooking pot with guests, although there are other etymologists who trace the word back to the Chinook word potlach, which was a Native American festival in the Pacific Northwest where hosts would redistribute their wealth, a practice that was later banned by the U.S. government at least until they began bailing out banks.

In usage today potluck refers to a meal where all participants bring something to share. There are four separate categories of potluck contributors to my mind.

The first is those who cook as if their life and reputation depend on it. They are the ones who bring platters of home-made, mahogany-brown fried chicken, elaborate lasagnas, or maybe paellas (block party 2008, parents meeting 2006) or oddities such as Cincinnati Chili (friend's birthday, May 2009). I usually find myself in this category -- competitive cooking

Usually, but not exclusively, the second category is made up of single men who are told to bring such esoterica as chips, napkins or bread. This group includes bachelors as well as married men who are attending events without their wives. I've also seen some women end up in this category, so I'm trying not to be sexist. I'm not sure what happens if a men-only group organizes a potluck, but a women's only group tends to end up with a lot of salads, which brings us to the next category whose members are famous for the phrase "I thought I would bring something healthy."

These potluck reformers can be counted on for the green salads, fruit salads, baby carrots and dips and similar offerings. (Of course, if they are presented with dressing, the healthy aspect does decline a bit.) Many potluck devotees (myself included) appreciate something starch-free and fiber-packed, others spurn these offerings for something with more cheese.

The remaining category of participant is the cooking and/or time challenged who might bring in a pizza to the delight of any children in attendance. Category One types have been known to not so silently fume over the popularity of the purchased contribution. Others accept them without prejudice and with great equanimity. As long as the food tastes good, anyway.

Around the blogosphere: Here's a recipe that would work well for a potluck -- Chinese Chicken Salad from Jaden of Steamy Kitchen. This is a fabulous salad that would qualify for both category one and three potluck participants. Elise of Simply Recipes has lots of recipes that work well for potluck. Try pretty much anything in her casserole category.
Posted by FJKramer at 4:24 PM

Had lunch with my very clever older son, the one who named the blog Blog Appetit, actually.

He added a subcategory to potluck participant category one -- the specialist -- someone who has one potluck dish down pat and brings the same thing every time.