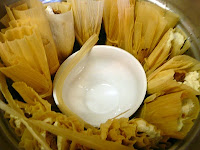 Since I made my tzimmes tamales a few weeks ago, I've been wanting to try making them again. A few friends came over to help form the roasted green pepper and cheese tamales and chicken mole tamales. As we filled and formed, wrapped, stuffed and tied, a kind of grace descended on us; the timeless connection of women working together in the kitchen from Chessy, age 9, to me, well, the oldest. Secrets were shared, stories told, connections made. Time (and the pile of tamales) grew. While eating the tamales was tasty, the time we spent making them was even more special. (to be continued ...)

Today is the first day of the Fancy Food Show in San Francisco. I'll be attending it and related events over the next few days.

Look for my tamale party write up (with recipes for the fillings and a NEW posole recipe, too) and my dispatches about the food show.

In addition to the above, I have some other, new recipes to post as well as some of the items I promised here.
Posted by FJKramer at 9:42 AM

Your tamale wrapping party sounds like a blast. Please tell me you celebrated the end of the day by eating some!

Yes, we ate them at potluck with wrappers and spouses afterwards and everyone went home with a supply, too.