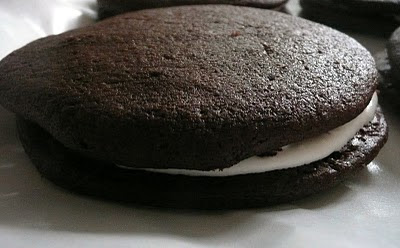 If I have the trendiness factor thing right, French macarons are the new cupcakes (which were the new muffins) and whoopie pies are the new macarons.
I find it all very amusing since nothing takes me back to childhood in the 60s faster than a bite of one of these whoopie pies. It reminds me of the hot dog-shaped Drake's Devil Dogs I would unwrap and practically inhale when I came home from school. I think they are an East Coast brand. My mom used to cram boxes of 12 into her carry on when she'd come to visit me in California until I begged her to please stop. I made out it was my middle-aged waistline that couldn't handle them anymore, but the truth is they just didn't taste the same. I thought it must be my taste buds had gotten too sophisticated for the milk chocolate cake and creme filling, but I also suspected they weren't made quite the same as when I was a kid.
One bite of my homemade whoopie pies and I was transported back to old school milk chocolate cake goodness, so I'm guessing that it was the later.

For the cookie part of the whoopie pie I used a recipe by Maida Heatter for what she calls "Whoops" in her book Book of Great Chocolate Desserts. You can view this recipe on Google books. Click here. (It should take you to page 142. If the recipe doesn't open all the way, click on the underlined page 142 link and the page should open for you so you can scroll through the recipe).

Since the recipe is kind of old-fashioned Americana, I choose to use a Hershey's Dutch process cocoa rather than one of my richer and fancier brands. I think if I was making them again I would use the richer cocoa and also melt in a little bittersweet chocolate for depth. However, there was no whoopsie about these whoopie pies -- they were perfect as is.

Since I only bake goodies like this when I can get them out of the house, I made these bad babies (also known as Moon Pies, Cowboy Pies, Devils Delights and other regional variations) for my book group. Women who have major diet control were skipping the daintily cut halves and going for whole whoopie pies.

Like the Black and White Cookies I recently posted about, these blasts from my cookie past are really more in the cake family than cookie, but because of their size, shape and eaten-in-hand functionality have become labeled as cookies. Also like the B&W cookies, they have that chocolate and white monochrome look going for them. Don't know if that's significant at all, but my favorite movies are pre-1934 black and white ones.
Posted by FJKramer at 5:04 PM

Thanks,
That means a lot coming from a great cook such as yourself!
FJK

Oh my god this remind me the Japanese lit chocolate Pies I had when I was young.