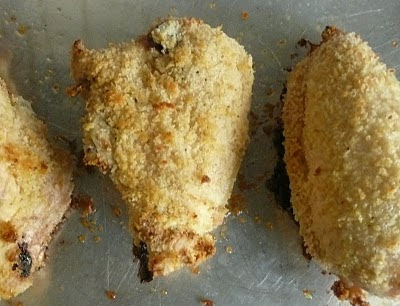 Long ago, in the life I led before I met and married my husband, I dated a man with whom I'd eat fried chicken (oddly enough I don't remember ever eating true fried chicken with Gary). Our favorite place to indulge was in an Israeli restaurant on the outskirts of Baltimore, which somehow specialized in fried chicken. The details on the restaurant are a bit fuzzy, but not my memory of that chicken. The fried chicken there was truly stupendous, the crust crackly, the chicken tender and juicy. It was Maryland style (dipped in egg, flour and bread crumbs) but Middle Eastern in its seasoning with lots of cumin and hot pepper. It was truly the best fried chicken I've ever had.

One night as we were coming home from the restaurant we put the white cardboard box of leftover chicken in the trunk of the car. I think we put it in the trunk since we knew the smell of the chicken would drive us to distraction if we had the chicken in the main compartment and that we would rip the box open and devour the chicken down to the bone before we got home and there would be no leftovers for lunch the next day.

We drove out of the parking lot and realized we were being followed by a small red car being driven by a tall man with a large red beard. We tried evasive measures, taking odd turns and u-turns, but our pursuer kept up with us and seemed to be intent on ramming our Japanese import with his. This was our turf though, we knew what to do, we drove into the parking lot of the nearest police station, screeched to a halt and began yelling for help. With the help of a friendly policeman we discovered that red beard was convinced we had just made a drug deal at the restaurant and the box of leftover fried chicken in our trunk was the stash we had just scored. Clearly our would-be vigilante was fueled by his own paranoia, but in one sense he was right, that chicken was addictive.

Eventually I moved away from Baltimore, broke up with that boyfriend and eliminated most fried foods from my diet, but I never forgot that chicken, so when I wanted to come up with some good picnic foods to celebrate Yom HaAtzmaut (Israel Independence Day on April 20) or just to celebrate Spring, I thought of that chicken. (You can read more about the holiday and see my j. weekly column here.)

My Oven-Fried Chicken adapts the concept a bit, removing the chicken’s skin and oven baking instead of frying. It is good hot from the oven for dinner or room temperature straight from the picnic basket at an outdoor get together. To accompany the chicken, try the Honey-Mustard Slaw with its shreds of crisp cabbage and tangy vinaigrette. Both dishes travel well if you are taking them to a picnic or potluck and the recipes multiply well if you are making them for a crowd.

Preheat oven to 400 degrees. Spray a baking tray with oil spray. Set aside. In a large, shallow bowl large enough to dip a piece of the chicken in, beat the egg with the lemon juice and hot pepper sauce. Mix the flour with the salt, cumin and black pepper and spread on a plate. Spread the bread crumbs on a plate as well. Rinse and dry skinned chicken. Dip one chicken piece at a time in the egg mixture, turning to coat. Shake off excess egg mixture. Dip into flour mixture, turning to coat and shaking off any excess. Place the chicken piece in the bread crumbs and turn to coat, pressing down or patting on if needed to cover with bread crumbs. Set chicken on prepared baking tray with what would have been the skin side up. Repeat with remaining pieces of chicken. Spray top of chicken pieces with oil spray. Put into oven, spraying the top of the chicken pieces again with the oil spray after about 25 minutes. Bake for about another 25 minutes or until the bread crumbs are golden brown and the chicken is cooked through. (Note: Timing will depend on thickness of the chicken pieces. Also, dark meat will take longer to cook than white.) Serve hot or at room temperature.

Trim cabbage and remove and discard core. Cut or shred cabbage into ¼-inch shreds or slices. Place in large bowl and set aside. Mix oil, mustard, vinegar, salt and pepper in a small bowl. Whisk until well combined, pour over cabbage shreds and toss to mix thoroughly.
Serve at room temperature or chilled.
Posted by FJKramer at 10:55 PM

I haven't tried frying in an oven for my chickens. I think it is more convenient and healthy, is it?

folks, I don't know if that is a real comment or just an attempt to link back to his baby crib business. Because the content relates to the topic, I'm leaving it up, but I ask you not to click to his business. I'm not sure how these people get to link their ids directly to their business websites, but they can now with open id

Same with baby cribs, i havent tried oven-frying. all i know how to do is the deep frying, which is so unhealthy yet so good! Maybe i should try this one out :-) thanks for sharing this one, looks like it's a good deal.

I have tried oven frying but my chicken never comes out crispy enough! This recipe looks promising and this blog is fantastic.

As a public relations major and new food blogger myself, I really love your mix of stories, recipes, and philanthropic promotions. I plan on featuring you in my next blog post about food blogs that I love!

Dear Amy,
Try it. It's much healthier and the coating stays crispy even after a day in the fridge.

Dear Athens Foodie,
You make me blush, how nice to hear that what I post makes a difference. Let me know when you post so I can link to it!

I live outside Baltimore. Do you remember the name of the restaurant or where it was located? Thanks

great story. i loved fried chicken and i am going to try this new recipe soon.

I think it was off Reistertown Rd back in the later 1970s.

It was in a converted house.

I took a quick look through the Baltimore Sun's list of area kosher restaurants and didn't recognize it, however, there are sure a lot more kosher restaurants (and more varied) then in my day!
http://findlocal.baltimoresun.com/search/restaurants/topic.restaurants.food-type.jewish-kosher?page=2

Ain't the internet grand -- I found it! It was the Sabra Room and here is what one nostaligic Baltimore resident wrote:

"In the Seventies, the Sabra Room restaurant occupied the porch of the Boxwood Inn on Reisterstown Road, near the Beltway...The Sabra Room had two owners and then was sold to the group of Iranian families, when it finally “stuck.” It moved to Colonial Village, and became the Royal."

You can read it all here: http://www.wherewhatwhen.com/read_articles.asp?id=99

If the tall red bearded man wanted it that bad, you need to send him the recipe and tell him it's from the secret fried chicken cartell. Thanks for the laugh and the recipe.