Eggs with Tomatoes and Peppers (Shakshouka) and Homemade Pita Bread 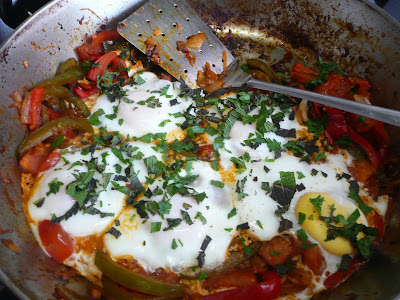 I've heard of short-order cooks, but for one recent j. weekly article, I became a short-order columnist. My editors needed me to make my cooking column about some facet of Israeli cuisine since it would be appearing in a special section with Israel as a theme.  This was complicated by my not being sure exactly how to define Israeli cuisine which is a mix of the seasonings and ingredients from Middle Eastern, Ashkenazi, Sephardic, Yemenite, Moroccan, and many other cultures united by an emphasis on fresh vegetables and herbs.

The dish that came to mine is one I think of as "all shook up eggs," more technically known as shakshouka (which is said to mean crazy, all mixed up). This egg dish began as an Ottoman stew. It migrated across Arab lands, was transformed by the foods of the New World and became popular in Northwest Africa. Jews had their impact on the dish as well by cooking the onions in olive oil. Immigrants brought this light entrée to Israel where it is popular for breakfast, brunch or even supper.

Serve shakshouka with fresh pita breads. The recipe below allows you to make the dough ahead and bake the breads the next day. (Here's a link to the column featuring these recipes that appeared in the j. weekly.)

Also spelled shakshooka (among other variants), there are probably as many ways to make it as there are people who cook it.  Some versions substitute mushrooms or spinach for the peppers. Others make it like scrambled eggs instead of cooking the whole eggs on top.  Many add some cumin or paprika to the seasoning mix. Needless to say, it is very versatile and accommodating and always delicious.

Make the dough up to two days ahead. These are thicker and tangier than supermarket pitas. Thanks to Rose Levy Beranbaum’s “The Bread Bible” for the inspiration on how to time-shift my recipe. If you want to make the pitas the same day instead of the next morning, don't refrigerate the dough and let rise for about two hours then proceed with shaping and baking the pita breads.

Mix yeast, water and sugar and set aside for 5 minutes until foamy. Mix flour, salt in large bowl. Add yeast mixture and oil. Combine. Knead in bowl until a rough dough forms. Knead dough on a lightly floured surface (or in a mixer with dough hook) for 10 minutes, adding flour or water as needed to keep dough pliable and smooth. Oil 3 quart bowl or other container. Press dough into bottom. Oil top of dough. Cover container with plastic wrap and refrigerate for 8 hours or up to two days. (Dough should double in size.) One hour before baking turn oven on to 500 degrees and place a baking sheet on a rack at the lowest point in the oven. Place a second rack as high as possible. A half hour before baking, place a pan with 1” of water on the top rack of the oven. Remove dough from refrigerator, roll into 10 balls and flatten into disks. Cover with plastic wrap. Let rest 20 minutes. Roll disks into rounds just less than ¼” thick. Let rest 10 minutes. Place rounds 2-3 at a time on hot baking sheet. Bake for about 4 minutes until puffed but not browned. Remove from oven, cover with towel. Let oven reheat a few minutes. Repeat.
Posted by FJKramer at 5:49 PM

Hai.. These look good.Great presentation and your Photography is also good