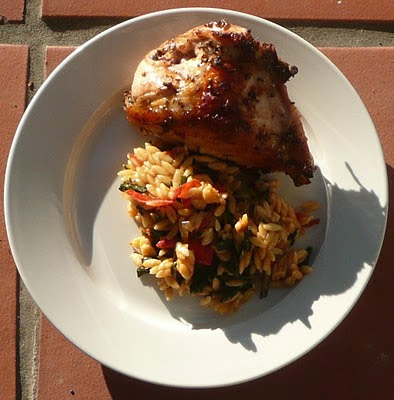 When I write my j. weekly column, the most frequent feedback I get is on recipes that are easy to prepare but offer something a bit different for entertaining. This Greek-inspired oregano and lemon baked chicken (with side dishes of leek-mint fritters and orzo with tomatoes and greens) seemed to strike a cord with readers recently.

I developed these recipes after talking to Nora Rousso, the proud inheritor of many northern Greek Jewish food traditions. The Los Gatos resident can trace her heritage back to the Ottoman Empire and the fabled Sephardic city of Salonika. From her grandmother, mother and aunt she learned to appreciate and cook recipes that resonate with meaning for not just her family, but for many others who share a similar heritage.

One of the dishes special to the Salonika table was leek fritters or patties. “They are like latkes, only tastier,” she says. “When my aunt made them they were half gone before they even got to the table. Before we sat down every one would sneak out to take one.”

On holidays, her grandmother might make small homemade noodles called “fideos.” Normally boiled in water, for special occasions the noodles would be cooked with chicken broth and stewed tomatoes.

Rousso says the traditional cooking she grew up mostly relied on salt and pepper for seasoning but that chicken was always baked in olive oil, lemon juice and “a ton of oregano.” She also has found memories of horta, a dish of cooked greens, usually dandelion greens with lots of lemon and olive oil.

Based on Rousso’s memories, I’ve put together a Salonika inspired meal. My j. weekly write up is here.

Leek and Mint Fritters
Serves about 6

I’ve added some mint for the fresh taste and bright green color as well as a dash of crushed red peppers. They would make a nice variation from potato latkes (pancakes) at Passover as well. I enjoyed the leftovers drizzled with tangy Greek-style yogurt the next day.

Trim, cut leeks and half lengthwise and clean. Place in boiling water and cook until softened. Drain and cool. Finely chop by hand or in a food processor. Combine with garlic, salt and peppers. Mix well with beaten egg. Mix in matzoh meal and mint. Let batter rest 5 minutes. Stir and drop by ¼ cupfuls into hot oil over medium high heat in large fry pan. Fry about 2 minutes on each side or until golden brown. (Do not crowd pan). Remove to paper-towel lined plate and serve warm.

In a large, non-reactive container, combine lemon juice, oil, water, peppers, salt, oregano and garlic. Mix well. Add chicken, turn to coat and marinate for 1 hour. Preheat oven to 450 degrees. Coat a large roasting or baking pan with oil or oil spray. Place chicken bone down in pan. Pour marinade over top of chicken. Roast, basting with pan juices every 10 minutes or so, until chicken is done when you cut into it and there is no pink at the bone but meat is still very moist. (Timing will vary depending on chicken part and thickness, a very thick chicken breast took 45 minutes.) Remove from oven, let sit 10 minutes. Serve with pan juices.

Orzo with Tomatoes and Greens
Serves 6

I combined several of Rousso’s food memories for this dish. It makes an excellent side dish for the baked chicken recipe. I used dandelion greens, but for a milder flavor Swiss chard works, too.

Heat broth to boiling in large sauce pan. Add orzo and 1/8 tsp. salt and 1/8 tsp. pepper. Bring to a boil, cover, lower heat and simmer, stirring occasionally, until the pasta is done but not mushy. (About 8-10 minutes.)

In a large sauté pan over medium high heat, heat the oil. Sauté onions until light brown. Add garlic, sauté until golden. Add tomatoes and sauté until just beginning to soften. Add in greens and remaining salt and pepper. Sauté until greens are tender (adding a bit of water if needed), about 10 minutes. Mix in cooked orzo and any leftover cooking liquid. Turn heat to low and cook until well combined and all liquid is absorbed. Taste. If the greens taste too bitter, add the sugar. Add more salt and pepper if needed. Serve warm with lemon wedges to squeeze over individual portions.
Posted by FJKramer at 1:05 PM

Well, at least I can get the chicken and lemon juice here. I will bring leeks back from my next visit to a real city.
Have you ever found a recipe for greek style yogurt?

HI AWCS -- you can make your own by draining it for a few hours (just not as long as you would for yogurt cheese.) Ck this post for basic directions.
http://www.clickblogappetit.com/2010/05/dairy-queen-or-i-make-ricotta-cheese.html