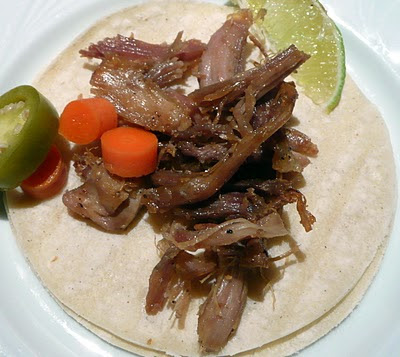 Oakland’s many cultural traditions help make it a vibrant place. Part of the flavor this mix gives the city is literally a taste of how others live, with lots of ethnic and street food to choose from. Since I rarely cook pork, I’ve adapted a traditional Oakland street taco filling for turkey and give directions on how to serve it just like the taco trucks that line International Boulevard.

Carnitas is traditionally braised or roasted pork that is cut into cubes, fried in lard until crispy and then shredded. Recipes vary by region throughout Mexico. Here I replace the pork with turkey and the lard with schmaltz. If you’d rather not cook in chicken fat, use the oil but try adding just a tablespoon or two of the rendered chicken fat to boost the flavor. Chicken fat, also called schmaltz, can be rendered at home or is available frozen in some markets. (Here's a link to Empire's schmaltz, the one I most use.  Interestingly enough they've chosen to call it "liquid rendered chicken fat."

Mix salt, pepper, oregano, cumin, oil and juice into a paste and rub on turkey meat. Let marinate for 20 minutes to an hour. Preheat oven to 325 degrees. Place turkey thighs in a roasting pan, tent pan with foil and bake until the internal temperature is 170 degrees or the meat is opaque through out and juices run clear. Be careful not to overcook. Cut cooked turkey into 1” cubes. Heat chicken fat until liquid and hot. (Or heat canola oil in a 12” fry pan until hot.) Add turkey cubes. Fry, turning cubes over often, until well browned and very crispy. Remove turkey from pan with a slotted spoon or tongs and drain cubes on a paper-towel lined plate. (There will be a lot of fat or oil left in the pan.) Using two forks, shred the turkey meat. Taste. Toss with additional lemon juice and salt and pepper as needed. Use to make Oakland Taco Truck Tacos (see below) or burritos, or serve with rice and beans.

This quick pickle is a typical accompaniment for street tacos. The tacos are also often served with thick slices of cucumber, whole or sliced radishes and a grilled or fresh green onion or two. Remove the jalapeño seeds for a bit less heat.

Cook the carrots in water to cover until just beginning to soften. Drain. Rinse with cold water. Put carrot and jalapeño slices in glass bowl or jar. Mix well. Cover with vinegar (or use half vinegar, half water for a milder pickle). Chill for at least an hour or two before serving. Store leftover pickles in the vinegar mixture in the refrigerator.

Heat the tortillas in a steamer or in the microwave wrapped in a damp paper towel for 20-30 seconds until warmed. For each taco, stack one tortilla directly on top of another and place on plate. Top with a few tablespoons of the turkey. Add salsa or other toppings as desired. Serve with wedge of lime to spritz over taco and a few pickled carrots and jalapeños on the side with radishes, cucumbers or other accompaniments as desired.

----------
a version of this article first appeared in the Temple Beth Abraham Omer.
Posted by FJKramer at 3:52 PM

I love using turkey in mexican food- yum yum! I'll have to give these a shot! Thanks for posting!

Try turkey (esp. thighs) in posole - that works well, too.
Thanks for stopping by!
F