Make It Hot (Sauce) for Valentine's Day with Recipes for Harissa, S'hug and "Below the Belt" Sauces 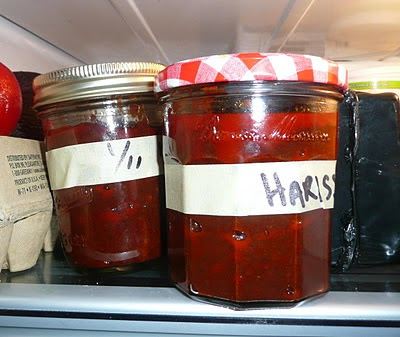 I'm personally a sucker for champagne, chocolate and flowers when it comes to Valentine's Day, but my husband, not so much.  If fact, he'd probably  like nothing better than one of these hot sauces and something delicious to slather them on.  (Good thing we already have a few jars of them in the fridge.)

Try the North African harissa or the Yemenite s'hug (sometimes written z'hug) on foods ranging from soups and stews to flatbreads and couscous as well as grilled meats. The American-style Below-the-Belt Hot Sauce is something my younger son and I cooked up and works anywhere you'd use a vinegar-based hot sauce.

Both Moroccan and Tunisian Jews make harissa from dried, hot red chilies. Harissa originated in Tunisia in the 16th century when the country was occupied by the Spanish, who imported the New World chili to its new territory. After the Ottoman Turks regained control of Tunisia, the condiment spread throughout North Africa. Tunisians traditionally season their paste with caraway; Moroccans are more likely to use cumin.

S’chug, the Yemenite hot sauce, originated in the 17th century after the chili pepper was introduced in Yemen. It combines fresh green hot peppers with cilantro and the flavorful spices favored in the local cuisine – black pepper, cumin, and cardamom. The resulting condiment is sometimes mixed with crushed tomatoes, sesame seed paste or yogurt to temper the heat.

Since the traditional peppers used for these sauces can be hard to come by, these versions rely on more readily available Mexican chilies.

You can tone down the heat by choosing milder chilies and by removing the seeds. Use caution when handling chilies and be careful to cover any cuts on your hands and to avoid touching your eyes. The sauces will get hotter and more intense over time.

If using the whole dried chilies, stem and seed. Cover with boiling water until soft, about a half hour. If using the chili flakes, cover with boiling water and soak for 5 minutes, until softened. Drain. Put softened chilies or chili flakes into food processor with garlic, salt, zest, juice, cumin and caraway (if using). Puree until smooth and thick. Add olive oil, process until combined. Store in covered glass jar in the refrigerator for up to 1-2 months.

This is adapted slightly from Gil Marks’ recipe from the “Encyclopedia of Jewish Food.”

Toasting the jalapeños gives the sauce a slightly smoky flavor. A version of this recipe appeared in this post, which also explains how the hot sauce got its name.

Heat a dry skillet or griddle (do not use non-stick) and toast jalapeño peppers until blistered and slightly blackened on all sides. Remove stems from all the peppers. Seed bell pepper (and jalapeño and Caribbean if milder sauce is desired) and roughly chop. Puree in food processor with garlic. Combine puree with vinegar and lime juice and heat in a small pot until simmering and cook until the bits of pepper and garlic have softened. Let cool. Pour into airtight container. Store covered in the refrigerator for up to six months.

Email ThisBlogThis!Share to TwitterShare to FacebookShare to Pinterest
Labels: Accompaniments, Ethnic, j. columns, Make It Home Made, See What I Wrote

Faith, would you post this to Punk Domestics? Great stuff.