Give the Gift of Peppermint Bark, Chocolate Truffles and Peanut Brittle for a Really Sweet Holiday Season

﻿﻿
﻿﻿ When I’m looking for hostess gifts or teacher presents this time of year, I often think of home-made candies. A tin or box of these treats is always appreciated. The candies also are good make-ahead desserts.

Two of these recipes have appeared in the blog before.  My youngest son and I created the Peppermint Bark recipe after he developed a taste for an expensive store-bought version of the candy. Children can help bash the peppermint candies into bits (under supervision, of course). The Cinnamon Almond Truffles evolved from a chocolate frosting recipe when I was looking for a non-dairy dessert. The Microwave Peanut Brittle is new to Blog Appetit and is one of the easiest I’ve ever made (although always be careful when working with hot sugar). The recipe is adapted from the cookbook that came with my first microwave oven.

(Note: All three recipes are vegan if you use vegan ingredients. Probably the toughest to find is vegan white chocolate, but it is out there. You may need to use chips instead of block chocolate.)

Dress up your candy by putting pieces into colorful candy cups or mini-muffin or cupcake liners. Look in dollar or other stores for inexpensive packaging to gussy up your sweet offerings. 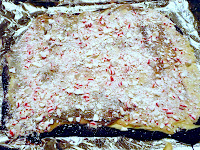 Line an approximately 10” by 15” rimmed baking tray with aluminum foil. Make sure the foil lining extends beyond the sides of the pan. Unwrap candies and put them inside doubled heavy-duty plastic zipper-lock bags. Seal the bags, taking care all the air is removed. Place on a cutting board on a steady, durable surface. Hit the candies with a rolling pin, meat tenderizer or hammer until the candies are broken into approximately 1/4-inch pieces.

Melt the semisweet chocolate. Spread the melted chocolate in an even layer across the bottom of the prepared baking tray. Place pan with chocolate in the refrigerator.

Melt the white chocolate. Take pan with semisweet layer out of refrigerator and spread melted white chocolate on top. Working quickly, evenly scatter peppermint candy pieces on top, pressing down slightly on larger chunks to make sure they adhere. Put back in the refrigerator until firm, about a half hour. Using the foil lining, lift the bark out of the pan. Peel off the foil and break into irregularly shaped pieces. Store in the refrigerator in a sealed storage bag or container. Take out about 20 minutes before serving.

If you want to make a more traditional truffle, check out this recipe from the now-defunct Charles Chocolates.  I've also made these with raspberry-almond flavoring by skipping the cinnamon and using half raspberry and half almond extracts.

Simmer soy milk over medium heat. Add margarine, stirring until dissolved. Stir in cinnamon and almond extract. Reduce heat to very low. Add chocolate, stirring constantly until thoroughly melted. Refrigerate covered for several hours until the mixture is solid but pliable (it may be a bit crumbly). Oil hands and measuring spoon if desired. Spoon out about 2 tsp. of the chocolate mixture and using hands and fingers roll, press or pinch into rough rounds. Store covered in refrigerator and take out about 20 minutes before serving and roll in cocoa powder if using.

Note: Times are given for 800-1000 watt microwaves. For ovens with a higher wattage, try reducing cooking times by about 1 minute at each stage.

Grease baking tray and set aside. In a 2-quart heat-proof glass casserole dish (do not use plastic), combine sugar and corn syrup. Stir. Cook in microwave on high for 4 minutes Mixture should be beginning to bubble and starting to brown. Stir. Add peanuts. Mix well. Cook on high for 3 1/2 minutes. Stir in butter and vanilla. Cook on high for 1 1/2 minutes. Candy should be browned but not burnt, liquid and bubbly. Remove from microwave, immediately stir in baking soda until light and foamy. Pour onto buttered tray and spread until it is about 1/4” thick. (It spreads easier if the baking tray has been warmed slightly.) Cool, break into pieces. Store in airtight container.

Homemade truffles are great! Really easy to make, too. I've never made peanut brittle. Odd, because I like it (although I rarely buy it). Nice recipe (all 3 are nice). Thanks.