Lentils Sweet and Sour, Hot and Cold with Recipes 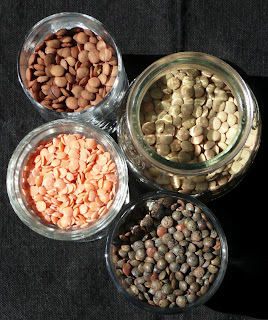 Some like it hot. Some like it cold (or perhaps room temperature). These lentil recipes are very obliging and can be served warm or room temperature. I am enamoured with lentils lately and decided to try two new recipes - one by a friend, another by a talented cookbook author and blogger.

Sweet and Sour Lentils is a favorite recipe of the Rosenthal family of Oakland. They even served it at their daughter’s bat mitzvah. Middle Eastern Rice and Lentil Pilaf is an unconventional approach to mujadara from Michael Natkin’s “Herbivoracious” (Harvard Common Press), a new vegetarian cookbook full of vibrant photos and recipes.

Recipes are used with permission (from Lori Rosenthal and Natkin's publisher's pr rep) and have been adapted for style and space as well as to reflect my experience making them.

Heat oil in very large skillet over medium low heat. Add onions and 2 tsp. kosher salt and cook, stirring occasionally until very soft, about 45 minutes. Turn up heat to medium high and continue cooking about 20 minutes more, stirring often, until deeply browned and sweet. Pour in wine and stir to scrape up bits at bottom of pan. Mix half the onions with the rice, lentils, cinnamon, cumin, 1 tsp. kosher salt and several grinds of black pepper. Taste and adjust seasonings (see note below). Form a mound of rice and lentils on platter, top with remaining onions, parsley, a grind of pepper and a few grains of the sea salt to taste. Serve warm or at room temperature. (Note: Cook the rice and lentils while the onions are cooking. Use regular brown or green lentils, not red lentils or the small, dark green French lentils. For three cups of cooked lentils, combine 2 cups of water with 1 cup of dried lentils. Bring to a boil, lower heat, cover and simmer for about 20 minutes until tender but not falling apart. Drain excess liquid. Natkin notes his recipe makes a milder, earthier mujadara, but he encourages experimentation. For a more assertive taste, try doubling the cumin and cinnamon and or adding ¼ tsp. of red pepper flakes.)