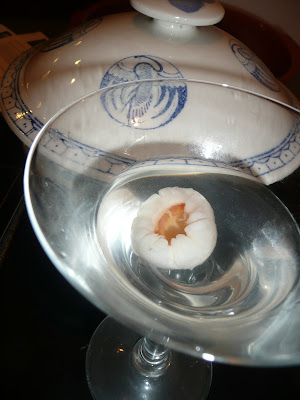 I first had a lychee martini at the lobby bar of the Four Seasons in Shanghai almost five years ago.  It's remained one of my favorite drinks ever since.  I'm not really a fruity cocktail drinker, but there is something about vodka mixed with the lightly floral and slightly spicy taste of the lychee that I really enjoy.

When I came back from China, the first place I looked for ingredients to recreate this cocktail was my local supermarket which had Soho lychee liqueur on sale.  I grabbed a bottle and have been making lychee cocktails since.

My current version of this cocktail involves chilling a cocktail or large martini glass and putting the following in a cocktail shaker over ice (for one large drink):

I've also made this with a vodka-lychee liqueur ratio of 3 parts to 1.  Some brands of canned lychees are packed in syrup that is cloyingly sweet, so taste before using and use the lesser amount if that's the case.
Gānbēi!
And of course, wishing everyone Xin Nian Kuai Le (which I understand is Mandarin for expressing New Year's wishes)  or Gung Hay Fat Choy (which is the Americanized version of the Cantonese expression).