Road Trip -- Down the Pacific Coast to Santa Cruz 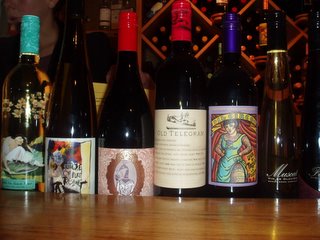 Friends of ours from the Midwest were visiting and Gary and I took them sightseeing for the day. These friends know the San Francisco area well and have already seen many of the traditional sights and sites, so Gary decided a road trip down the coast in search of sea otters, seals and sea lions was in order.

As we headed from downtown to the Great Highway, our first detour was to view the tasteful renovation of the Cliff House overlooking the Pacific Ocean and Seal Rock. There were no seals there, however. We gave our friends a history lesson about the long-gone Sutro Baths and Playland, instead. It was a good thing the bar wasn’t open yet, or I think Catherine and I would have voted to stay and try out the cocktail menu and drink in the view.

We didn’t get far. Just down the Great Highway is the Beach Chalet with its magnificent WPA murals. We chose to ignore the brew pub that now occupies the top floor of the building and concentrate on art, culture and history.

Our odyssey continued as we loaded back up in Gary’s van and wended our way down the spectacular Northern California coast line, stopping at a few of the rugged beaches to admire the pounding surf, wind blown trees and craggy coastline and looking in vain for our marine mammal friends.

Just above Half Moon Bay we stopped at the harbor at Princeton by the Sea. The majority of boats here are working fishing vessels of one sort or another and there are several fish related businesses on the pier. We poked around a bit and decided that since we didn’t have a cooler buying raw fish was not a souvenir we should consider when I declared I was hungry and I wanted fish. Now. We tried a colorful café overlooking the harbor. Barbara’s Fish Trap had fresh fish from rockfish (which Ferrol craved) to calamari. Preparations were simple, portions were huge. The four of us gorged ourselves on broiled fish with coleslaw, fish and chips (the fried fish was perfect, the chips less so), fried calamari rings (incredibly tender and moist with just the right crisp from the fryer) and the largest shrimp and crab louie that I have ever encountered. (The copious amounts of seafood were fresh and steamed until cooked through and not a second more, with a clean taste and a good texture, but I am sorry to say the sauce was a glop of sweet thousand island dressing and the lettuce was rough chunks of iceberg. I ate every bite, however.)

Satiated for now, we shoved off, continuing to explore the twists and turns of Highway One, past fields of Brussels sprouts growing on their stalks, looking like they would be harvested just in time for the nation’s Thanksgiving feasts. We stopped at the Pigeon Point Lighthouse and from the wind-whipped deck at land’s end we finally saw our marine friends frolicking in the waves – a sea otter and a harbor seal.

Mission accomplished, the decision was made to turn inland and head back via a faster (and straighter) highway. We had barely turned onto Pine Flat Road when Catherine, Ferrol (a big wine enthusiast) and I all yelled at Gary to stop. We had spotted the Bonnie Doon Vineyard Tasting Room. Luckily, Gary decided to be our designated driver, so we could imbibe to our hearts’ content. I’ll post more about our wine tasting experience in the future, but let’s just say after a full flight of wines that included a raspberry desert wine in a dark Belgian chocolate cup, I was ready for a nap or a mug of something caffeinated.

Now our route took us through the redwoods of the Santa Cruz mountains and when we popped out we were in the little town of Felton, which reminded me very much of a rustic Berkeley. We stopped at the White Raven Café, where they take their chai seriously. Their chai deserves a post of its own and will get one soon.

Then, somehow to our surprise, we were back on a major highway and on our way back to San Francisco. We’ve promised to visit them in Minnesota. They have a friend who keeps them supplied with fresh white fish and a friend who owns a Vietnamese restaurant. Sounds like it will be a great trip!
-------
Resources:
Barbara's Fish Trap, 650. 728.7049, no web or email, 281 Capistrano Rd., Half Moon Bay, CA 94019
Beach Chalet – http://www.beachchalet.com/
Bonnie Doon Vineyard Tasting Room: http://www.bonnydoonvineyard.com/tasting/bonnydoon
Cliff House -- http://www.cliffhouse.com/

Uhhh you're making me want to be home in CA right now! But I have to wait till 12/24 to be there :) I grew up in Los Altos and family now has a home in Carmel, CA. My parents and I used to go to Half Moon Bay a lot and we love Santa Cruz. Sounds like a fun holiday!