No Waffling -- This is a Great Ice Cream Sandwich 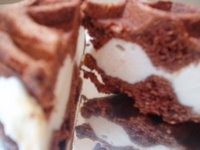 I made the mix into waffles and enjoyed the results with strawberries and yogurt. For a full taste test report, see my write up at Just Baking.

The waffles were surprisingly not too sweet, which made the leftovers a perfect foil for the ice cream in these Chocolate Waffle Ice Cream Sandwiches. (Plus, tell yourself that because of the whole grains in the waffles and calcium in the ice cream, this is actually good for you!)

Spread softened ice cream on top of one of the waffles. Press down with spoon so the ice cream fills the waffle pockets. Drizzle with complimentary flavored syrup if desired. Place another waffle on top, pressing down slightly. With a sharp knife cut into desired size halves, sticks or triangles (this somewhat depends on the size and shape of your waffle.) Wrap each half, stick or triangle snuggly in plastic wrap and freeze until firm.

Update:  Just Baking and other Well Fed Network links are gone, dead, no more.  Thanks to the Wayback Machine archives, you can see the post here.

Or just continue reading to see a copy of the post itself.

Waffles and chocolate. What could be better except maybe chocolate waffles?
That was my thought when I tried King Arthur’s Flour Whole-Grain Chocolate Fudge Waffle mix (which now comes packaged as a pancake and waffle mix).
The mix was quick and easy to prepare. It calls for melted butter or vegetable oil, eggs and milk. Everything else was in the mix, including semisweet chocolate and cocoa.  I tasted a bit of the dark brown batter when it was raw and a strong, quality chocolate taste came through. Bits of chocolate chips peaked through. As the batter baked in my waffle iron, it smelled like brownies, only better; since when do you have brownies for breakfast?
Timing the waffles on my ancient waffle iron was difficult since it was hard to tell when waffles are properly browned when they are brown to start out with.
When baked, the waffles’ color had lightened to about the shade of a Hershey’s milk chocolate bar and my segmented rectangular waffles sort of resembled a giant one, too.  Not just the color had lightened, but the taste was not as strong nor was it very sweet.  The bits of chocolate had melted and were no longer visible. The interior crumb of the waffle was good and it was tender with a bit of crisp resistance to the bite. The waffles definitely tasted of chocolate, but not in an intense, dessert way.  I was surprised, but rationalized that this would make the waffles more of a breakfast treat than a splurge and allow for some embellishments.
I topped mine with fruit, yogurt and a bit of caramel syrup and found the combination heavenly.  I thought the waffles would also go nicely with jam or maple syrup. For a really decadent version, try whipped cream and hot fudge sauce.  They seemed very versatile. In fact, I turned the leftovers into toffee-caramel ice cream and chocolate waffle sandwiches.
Overall, I am not a mix person, but I use and like King Arthur flour and found this waffle mix to be quick and tasty.  For this kind of product it is even relatively healthy, boasting six grams of fiber (thanks to the whole-grain spelt).
Posted by FJKramer at 10:22 AM

I could do with a couple, too!

Keep on posting such stories. I love to read blogs like this. Just add some pics :)
SteaveTheMighty