My Night With Narsai -- An Exceptional Evening at Farallon 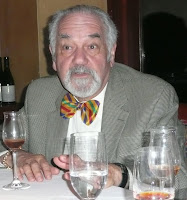 Are there wine pixies?

By that I mean wonderful, warm, witty, and knowledgeable individuals who sprinkle their affection for the fruit of the vine over the rest of us to make us more informed and discerning about our own wine choices without ever seeming condescending, judgmental or know-it-all.

If they do exist, I think I’ve just met one and I wish you could meet him, too.

Narsai David is a former restaurateur and a San Francisco radio personality. He has been involved in innumerable other food businesses as well having written the The Monday Night at Narsai's cookbook. He is a charming man with silver hair, an impeccably tailored suit and a colorful bow tie. He and his wife, Venus (or Veni as she is called), are also philanthropists, giving money, time, effort and even wine from their own outstanding cellar to help a variety of causes, including Alameda County (CA) Meals on Wheels, which provides meals to the homebound.

It was because of the Davids’ devotion to helping Meals on Wheels that a little wine pixie dust was spread on my life. Good friends were the successful bidders for a special dinner at the renowned San Francisco seafood restaurant Farallon. All the wines for the dinner were to be supplied by Narsai and Veni. The food was to be donated by Farallon and coordinated with the Davids’ wine selections.

It was a magical evening. Our friends had invited four other couples to join them and the Davids. Stepping into Farallon was otherworldly with a décor kind of like if Alice in Wonderful had been set under the sea or if Little Mermaid had been designed by Dali. We were ushered to a private room and immediately received some of the best service we have had in a restaurant. We were also immediately handed flutes of champagne and offered oysters, caviar and a goat cheese and brandied cherry appetizer.

We went on to sample three different kinds of champagne, all the while having Narsai tell the story of why he chose them for each appetizer. The champagne that made the greatest impression on me was the 1979 Schramsberg Blanc De Blancs. It tasted slightly of caramelized sugar and its effervescence just barely registered on my tongue, but I was smitten. Narsai explained how he and Veni prefer older champagne. I had tasted the proof and had to agree.

Before we sat down to the dinner, Narsai produced a bottle of sherry originally made in 1871. The sherry was amazing – strong, more like a shot of liquor than a fortified wine, but still smooth with clear, tawny notes. I had two glasses while I listened to Narsai describe how he found and procured the wine. 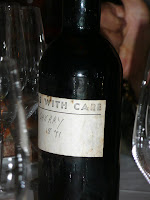 Then came dinner. The first course was seared Mediterranean rouget (red mullet) with Dungeness crab “thighs.” The Davids served a 2000 Stony Creek Chardonnay with it. As I sipped and ate, Narsai told us about how the wine with its lean flintiness was chosen to compliment the dish. With every bite and slurp I had to agree with the wisdom of his choice.

With the half of lobster roasted in butter and served with English pea ravioli and orange fondue sauce, Narsai had chosen a 2005 Salus, Staglin Family Vineyard Chardonnay, feeling that it would offset the lushness of the dish. I know he said more about this including why the 2000 Chardonnay tasted younger to us, but at this point I was reluctant to give up my Stony Creek and I was really focused on my Maine lobster.

Next came two red wines with the whole roasted Creekstone Farms filet of beef with morels, fava beans and sauce Bordelaise (which I could have drunk on its own). Both were from 1974, but I preferred the Trefethen Cabernet Sauvignon. Narsai spoke a bit about why wines will age differently and kindly answered wine question after question.

The desserts (a lemon balm meringue tart and a German chocolate sundae) were served with a 1966 Chateau Sudiraut. The wine was sweet, but with a nice edge. It was also very strong, I could only manage a few sips, but did manage to finish both desserts and pay attention to Narsai’s discussion about the advantages of noble rot. (I wish I had been a better reporter and taken more notes, but to be honest, I was having too much fun being a guest.)

After dinner Narsai uncorked a 1962 Hine Grande Champagne Cognac. It was a dream of a cognac, smooth and strong and satisfying after our elaborate meal. Narsai was explaining the difference between grande and petite champagne at that point (I think), but I was lost in the vapors and plush taste of the cognac.

The evening was grand. The Davids were great. And special thanks to our hosts, Farallon restaurant and to my husband for being a designated driver that night. 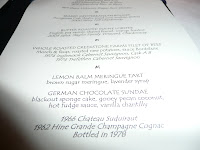 I have the Farallon cookbook, but I've never made anything from it. (It's a bit on the artsy-fartsy side for me, as cookbooks go.)