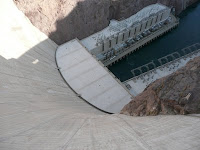 I'm on one of my twice-yearly business trips to Las Vegas.
Unexpectedly we had some free time yesterday so we rented a car and drove to Hoover Dam. Much about the project (scope, construction, innovations, art deco design) are admirable. The location (in Black Canyon) is unbelievable. Some of the water history that led to its being built and the "spoiling" of such a natural wonder do leave some lingering questions.

On the way there we stopped at Boulder City. It was a "blast to the past." Once Nevada's largest city (population was then 7,000) it still retains elements of being a company town for the Six Companies, the corporations that banded together to build the mighty dam. Don't get me wrong there were lots of chain choices for fast food, but also lots of interesting seeming local ones. We at the Southwest Diner, where the prices, the quantity and the quality of the food were all very satisfactory. For under $10 you could get a pot roast dinner with soup or salad, mashed potatoes or fries, string beans and a dish of ice cream for dessert. The food and the decor at the restaurant were all on the homey side with lots of cutesy displays of Americana. The service was great. I had the taco salad and Gary had the pulled pork. 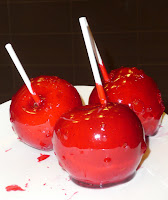 That night we tried the buffet at the Wynn. Many people had recommended it to us. It had all the requisite touches buffets in Vegas all have these days -- cooking stations with a variety of ethnic foods, lots of crab legs, sushi (a bit more limited than some), and a big carving station.
I particularly enjoyed the New Zealand lamb chops, the fig sauce from the grilled pork with fennel pollen (if the pollen was there it wasn't enough to either make me sneeze or taste it) and the wonderful selection of salads and cerviches. My big disappointment is that the dessert station ran out of candy apples before I could get one. While I thoroughly enjoyed the Wynn buffet, so far my favorite is the Le Village Buffet at the Paris.