Sea U II -- A Tale of the Deep Sea, Big Fish, Sisters and a Deconstructed Seared Tuna Cassoulet 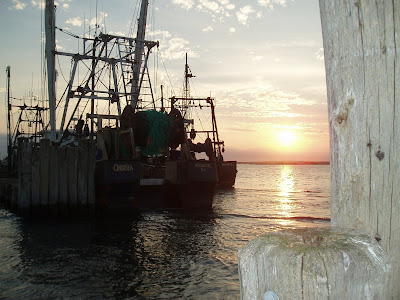 In the video, my brother-in-law John looks determined and weary but gleeful. A 260-pound big-eye tuna was on the other end of his fishing rod line. For two hours or so he and the fish had battled until they were both were exhausted. When John and his buddies were finally able to haul the creature through the fish door of his boat, the tuna was so spent that it lay on the deck almost still awaiting its fate without the usual flipping and struggling about. In the video you can see the respect the men of the Sea U II had for their prey as well as their delight in catching the big one that did not get away.

If your idea of a tuna comes in a can or as a clean slab of pale flesh from a fish counter it can be a shock to come face to fins with your dinner. Most Americans have become pretty squeamish about the fact our proteins of choice come from living creatures. I know the first time lobsters under my control went from live to formerly live I pretended a blitheness I didn’t really feel. But now I’ve come to accept that if I eat meat or fish or chicken my meal once had a face and it died for my dinner. In my opinion it is an acceptance anyone who decides to be an omnivore should have and we should have the same respect for those animals as the sport fishermen did for that tuna.

The tuna itself was no trophy. It ended up feeding untold many. It did earn Captain John a trophy, though, the prize for the largest tuna caught during a local marina’s fishing contest – a large fiberglass fish.

While this tuna was large, it is not the largest John and his friends have caught, that one was over 500 pounds. While the catch is shared by all those who crew the boat, that still means my sister, Beth, ends up with a lot of fish to cook. She has created almost a whole cookbook of recipes for the fish John has caught off the coast of Long Island, New York. She also always carefully freezes some of the choicest specimens for me to take home after my yearly visits. With the correct packaging and no unexpected flight delays, a few pounds of tuna steaks stay frozen from New York to San Francisco.

The tuna I receive from Beth and John always inspires me to create the best dish I can to honor both the fish and the gift. The recipe below came to me simultaneously as a title – Seared Tuna and Deconstructed Cassoulet – and a taste – peppery seared tuna with saffron broth and vegetables. The rest came together out of what I had in my pantry and refrigerator. To see another recipe I created for tuna caught by John, please see the limoncello-marinated tuna over couscous salad recipe here.

I’m always wary of calling something a cassoulet when it is not classically so, but this is what my unconscious instincts called the dish as it leapt practically fully formed in my mind so I’m going with it. It is a light dish with lots of satisfying flavors brightened by the lemon zest and peppery finish of the fish and the crunch of the seasoned croutons. The bean and vegetable mixture with the croutons works well as a side dish or vegetarian main course (when made with the vegetable broth) without the fish.

Spread the cracked pepper on a plate and press both sides of the tuna steaks into it. Heat the grape seed oil in a 12” sauté pan or deep skillet over high heat until the oil is smoking. Sear the tuna steaks on both sides until the outside is crusty and brown being careful not to cook the insides. Set the tuna steaks aside and wipe out the oil and any debris with some paper towels.

Add the 2 Tbs. olive oil to the pan and heat over medium heat. Sauté onion until beginning to soften and golden, add garlic and sauté a moment. Add carrots and sauté a few minutes and then add red bell pepper. Sauté for a minute and add celery and bok choy stems. Sauté, stirring often, until the vegetables have begun to soften. Add the ¼ tsp. of salt, ¼ tsp. of ground pepper, ¼ tsp. of red pepper flakes and the ¾ tsp. of the Herbs de Provence seasoning. Stir well and sauté for a moment to release aroma of the seasonings. Add the chicken stock, bring to a simmer and add the saffron threads. Simmer gently until the vegetables are somewhat softened. Add the cooked beans, tomatoes and the bok choy greens. Allow to simmer until the vegetables are tender but still a bit crisp to the bite. Add the lemon juice and scatter ¾ of the lemon zest over the top of the vegetables and combine. Taste and correct the seasoning. Place the tuna steaks on top of the mixture and let them gently reheat in the simmering stew. Check tuna for desired doneness and remove. (For true seared tuna, the fish should still be mostly raw in the center.) Put vegetable mixture in serving dish. Place tuna steaks on top. Scatter prepared croutons over all. Garnish with remaining lemon zest. Serve warm or at room temperature.

To make the croutons (can be made ahead): Preheat oven to 350 degrees. Toss bread cubes in a bowl with ¼ cup of olive oil, remaining salt, pepper, red pepper flakes and Herbs de Provence.
Spread coated bread cubes on a baking sheet and bake in oven until toasted and brown, turning as needed.

Here's info on tuna choices and sustainability in the U.S. from the Monterey Bay Aquariam.
------------------------
About the photo: Commercial fishing boats at the Hampton Bays, Long Island, marina by sister and brother-in-law keep their sport fishing, 52-foot Sea U II.
Posted by FJKramer at 12:12 PM

I cooked it and it was too delicious.... yuuuuummyyy.... I added some Patan ghee in it for better flavor...

Dear Ron,
Thanks for the positive feedback.
I'm not familar with patan ghee -- how is it different from regular ghee?