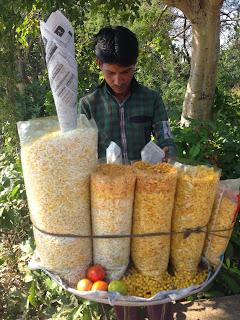 Bhel Puri is a mix of Indian snack foods, usually assembled or customized on the spot and served in a paper cone.  It is a class of food known as a chaat, which I'm sure I'll be writing about a lot just based on how often I ate them in India.

This vendor is outside the Ajanta Caves near Aurangabad, India.

He mixed puffed, baked and fried bits of rice, wheat, chickpea flour and other small bits of deliciousness and sprinkled with spice and lime juice.  Elsewhere I had bhel puri mixed in with cooked chickpeas and diced, cooked potato with a tart, thin tamarind sauce.

I haven't yet developed my own recipe, so here's some background from old reliable Wikipedia.

Here is a recipe that seems pretty close to what I experienced in India.  Warning you will need to look up some of the ingredients and shop at an Indian grocery store to make this! Same with this one. This version will probably still require a trip to the Indian grocery store but seems a bit less complicated.

Until I update this with my own recipe -- here's a Jewish fusion take on a similar Indian classic, panipuri, which takes the snack mix and puts it inside a small, puffed bread.  For my recipe for Bamba Bombay Pockets, please click here.