My Lemon Mint Tea Story - From Hammam to Tea Cup 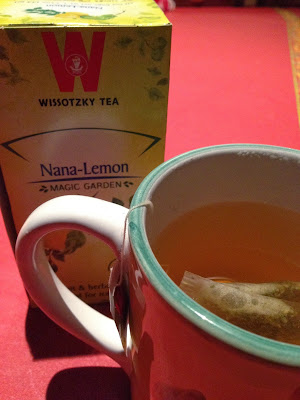 This the first in an occasional series highlighting some of the many teas I regularly drink  (or at least sample).  Since I just inventoried my decaf and herbal teas I know I have 27 boxes or tins of these types alone so this could be a very long running feature.  In addition, I have another few dozen individual leftover and sample tea bags, too.  I haven't begun to inventory the black, green and white teas  I've accumulated.  Plus I have a lot of tea strainers, pots and other equippage to blog about. Oh, and the Fancy Food Show is next month and I always find new teas to try there.


I first learned about the wonderfully refreshing powers of lemon mint tea while I was laying half naked on a small towel on a large marble platform surrounded by billowing, hot steam in a Turkish hammam looking up at the intricately carved domed ceiling and feeling languid in the heat. Christina, one of my traveling companions, was telling me how she was able to find this tea, a favorite of hers she has bought all over the Middle East in Istanbul and encouraged me to seek it out.

"I can't believe Lipton makes it and you can't buy it in the States," she said.

I'm a big fan of both flavors and was intrigued enough to buy a box of Nane Limon Tea (once I had my fill of steam, cold water pool plunges, massages and brisk body scrubs at the hamman) at a Turkish grocery store to bring back with me.

Back in California, I brewed a cup and took a small sip. It was as marvelous as Christina had promised. It is more of an herbal infusion than a tea since the ingredients are pretty much just fruit flavor and herbs such as lemon grass and mint. I found it warming in the winter, cooling in summer.  It was a good pick me up yet it also was a good tea to relax with. It was great iced. It was great hot. Because it was herbal and had no caffeine I could drink it any time.  Only one problem -- I only had 20 tea bags of the stuff.

I hoarded my supply and stopped sharing it with friends and relatives. I searched all the local ethnic and gourmet markets -- no Lipton lemon mint tea, or even any substitutes.

I checked the U.S. Lipton website. Not there.  (But you can see it on the Turkish site.) I thought about mixing a lemon tea with a mint tea and making my own but before I could begin to experiment, I found a replacement brand in a local market specializing in Jewish and Israeli foods.

That's where I found my current lemon mint tea crush -- Wissotzky Nana-Lemon Tea. It's not exactly the same, but very close and wonderful in all the same ways as the Lipton version.  Wissotsky is made in Israel and is available through mail order as well as in some stores here in the U.S.  It's only $2.99 for 20 bags -- a whole lot cheaper than another trip to Istanbul, but of course, the hammam experience is not included.
----------------------------------
The Lipton's box lists ingredients as: lemon grass, mint, lemon peel, lemon flavor, citric acid and chicory root. The Wissotzky tea ingredients as per the box are: Mediterranean spearmint leaves, rosehip, orange and lemon peels, citric acid, spearmint and lemon flavors. I haven't tasted these side by side so I can't say which I like better.
Posted by FJKramer at 1:53 PM

Email ThisBlogThis!Share to TwitterShare to FacebookShare to Pinterest
Labels: Fancy Food Show, In My Cup, Java and Chai Jive, Turkey - the Country