National Pie Day -- The Life of Pie on Blog Appetit -- A Round Up of Pies, Tarts and Other Pastry-Crusted Things 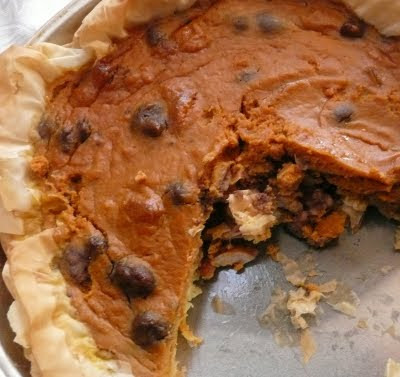 Today's National Pie Day so I thought I would list out a sample of pie and similar recipes available here on Blog Appetit.


While I  yield to no one on my love crust-enclosed goodness, I was a bit surprised to find out there is an American Pie Council with corporate members and sponsors ranging from ingredient producers, bakeries and equipment manufacturers to a pie plate maker. The fun continues with contests, festivals and a tie to the movie Labor Day (which apparently features lots of pie making and or eating going on).


No mention of band camp (American Pie movie reference), slapstick pies in the face, the number pi or other related things.  The council also did a survey of 1000 American pie eaters to find out their preferences.  Alas, they did not present this information in a pie chart -- perhaps I will feel ambitious later and cook one up.

From the overblown and relatively hard to read news release:


"The survey revealed that pie is a preferred dessert even on special occasions other than Thanksgiving, with 70% favoring it on Christmas and 67% considering it a staple of family gatherings. And, it’s not just an after-dinner treat. Pie is a great late-night snack, too, 58% of the respondents said."


No word on what percentage just prefer pie on non-special occasions.


"Apple takes, ah, the cake, but perhaps surprisingly chocolate pie tied with pumpkin in the No. 2 spot, while cherry placed third, according to the survey."


I wish the APC provided more info (where for example are my favorites -- lemon meringue and strawberry rhubarb), but the rest of the new release touts the movie not the dessert.


For the record, pies also make a wonderful breakfast dish --- my mother was partial to apple pie with cheese as a way to start her day. (Honestly she would eat that pretty much any time of the day).  I've made oatmeal as well as white bean breakfast pies.  Savory dinner pies (think quiche among others) are also popular.  In addition to the usual slice, pies have gotten themselves tarted up lately with trendy pie pops and hand pies.


Keep reading for a round up of appropriate recipes from Blog Appetit. 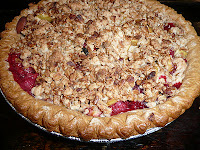 Some of my fancier creations:


Pistachio Tart with Fresh Figs and Honey
Figs feature in my Fig-Almond Tart with Cornmeal Crust.  The crust is also made with olive oil and it is a press in, not roll out crust.
Almond Tart with Strawberries (also with no-roll out crust)
This same crust works create with Lemon Curd and in this very grown up chocolate variation.
Using filo dough makes strudel easier to make than you might think.  This Roasted Strawberry Strudel works for plain or fancy dinners.

Pie for dinner is always a favorite of my -- try this French Cottage Cheese Pie or perhaps this potluck friendly vegetarian Tamale Pie.

What's your favorite pie recipe -- feel free to leave a link in the comments section.
-----------------
Note: Lots more photos in the links.  Had trouble with the upload -- will add more pix later if I can get the bugs out of blogger.

Email ThisBlogThis!Share to TwitterShare to FacebookShare to Pinterest
Labels: Desserts, Live from the Archives