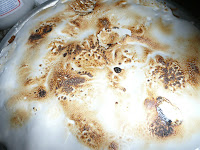 I’m reviewing the book The Food You Crave by Ellie Krieger of Food Network fame over at Paper Palate. Here's the link.

I won’t spoil the surprise of what I think of the book, but I will say I enjoyed the three recipes I made from it, although it was hard for me to make them exactly as written.

Over at Paper Palate, I’ve posted Krieger’s Snowpea and Radish Salad recipe, but here at Blog Appétit we are going to explore the deeper, darker, more chocolately side of The Food You Crave – The Double Chocolate Pudding Pie. And because I can’t keep my hands off a good thing, I made it into a s’more pie. (A shout out goes to the blog Smitten Kitchen for that inspiration. SK's version is includes homemade marshmallow topping. See it here.)

Krieger’s recipe, as written, is a great calorie “value” with lots of luscious dark chocolate taste. It is not too sweet and is not a lot of calories for what after all is a chocolate pie (255 for an eighth of the pie serving according to the book). Adding the marshmallow topping will add about 75 calories per serving, so you may decide not to gild the lily and just go with Krieger’s suggestion, a decorative fringe of freshly whipped cream. The pie would also be delightful topped or served with seasonal berries.

Cooking Spray
7 full sheets of graham crackers (I hate to say it but use the regular commercial ones, I had to throw out a crust made with the organic whole wheat, molasses and honey ones – it was like cardboard, or maybe make your own graham crackers).
2 tablespoons butter, softened (the recipe didn't say, but I use unsalted for baking)
1 tablespoon water
1 tablespoon unflavored gelatin (which is one packet of Knox)
1/3 cup boiling water
2/3 cup sugar
1/3 cup unsweetened cocoa powder (Krieger doesn’t specify, but I think a natural process will give you more chocolate flavor than the Dutch type in this recipe. It doesn’t dissolve in milk as well, so make sure you really mix it until it’s smooth.)
¼ cup cornstarch
1/8 teaspoon salt
3 cups lowfat milk (I used 1 percent)
2 ounces bittersweet chocolate, chopped
2 teaspoons vanilla extract

Making the crust: Preheat an oven to 350 degrees F. Spray a 9-inch pie pan with the cooking spray. Grind the graham crackers in a food processer until very fine. Add the butter and water and whirl around until the mixture begins to come together. Press the crumb mixture into the bottom and up about 1 inch on the sides of the pie tin. Bake for 10 minutes. Set aside to cool.

Preparing the filling: Put the gelatin in a small bowl, add the boiling water. Stir until dissolved. Set aside, stirring occasionally allowing the mixture to thicken but not get too solid. Mix the sugar, cocoa powder, cornstarch and salt in a medium saucepan. Add half the milk, mix well until the mixture is smooth. Stir in the rest of the milk. Put the pan on medium heat and stir constantly (Krieger recommends whisking) until the mixture thickens and comes to a boil (about 10 minutes, mine too a little longer). Remove from the heat. Stir in the chocolate until melted. Add in the vanilla and the gelatin mix. Stir. Pour the chocolate mixture into the pie shell. Refrigerate for at least three hours before serving.

Whipped Cream Topping Option: Whip ¼ cup cold heavy cream in an electric mixer until it is “halfway” to soft peaks. Add in ½ teaspoon sugar and then whip until it “barely holds” a soft peak. Krieger recommends putting the whipped cream in a pastry bag or a ziplock with a corner cut off and piping a decorative pattern around the edge of the pie. You could also just put a dollop of the good stuff on top of each slice as you serve it.

S’More Pie Option: Once the pie is cold and right before serving, spread a jar of marshmallow fluff or cream (7 to 7.5 ounces depending on brand) on top. Smooth the cream out. (My son, now known as the former future pastry chef, who helped with this recipe, found it easiest to use an offset spatula for the job.) Then, watching the pie like a hawk, you can brown the marshmallow topping under the broiler for that traditional “s’more” look. We used our handy-dandy crème brulee butane torch for the job. I suspect using the torch was Noah’s whole reason for helping me make the pie, but I digress.

Note: The s’more topping doesn’t hold well, although the unadorned pie lasts for a few days in the refrigerator. Top the pie right before serving and keep it cold for the easiest serving and best taste.

Believe it or not, the pie came out very adult tasting. Of course, the marshmallow topping added some sweetness, but the whole experience was much less sweet than I anticipated and had a nicely balanced flavor. I suspect it had something to do with the dark chocolate filling not being as sweet as a Hershey’s milk chocolate bar. If your crowd isn’t in to retro desserts, a little whipped cream and a few berries will definitely elicit oohs and ahhs and balance the chocolate well.

Update: Paper Palate and its links are no more, but thanks to the Wayback Machine, you can see that post here. (6/15)
Posted by FJKramer at 10:33 PM