From Knish to Cheesesteak and Back Again. A Story of Diners, Delis and the Opposite of Dives 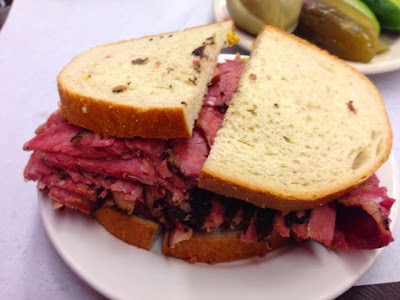 Well, this report has been a few months coming, but I'm finally taking a few minutes (when I'm off on another adventure, of course) to report on what Gary and I did on our Thanksgiving vacation.  (Note:  due to the limitations of Blogger aps and ipad interfaces I can't easily add the links to this report. I'll update with those as soon as I can. In the meantime, Google, bing or any other search engine should be able to find what you need. Nothing esoteric here. You can blame Blogger for the mishmash of fonts and odd photo handling as well.  Blogger doesn't seem to do mobile well.)

We spent two weeks on the East Coast, obsteniosuly to visit friends and celebrate Thanksgiving with family, but It was also about eating delicious things, seeing sights and riding public transit.  Below are some highlights. Watch for more analytical and recipe filled posts on some of the dishes and experiences I had.

Gary and I first flew into JFK and took the AirTrain and two subway trains to our hotel by Lincoln Center.   It was a fine hotel, especially since we picked it blind off Hotwire.  Great neighborhood with lots of nearby restaurants on 9th and 10th avenues (Hell's Kitchen) to choose from for reasonably priced ethnic food.  Our first night we had Turkish tapas (that's what the resto called what I'd call a mezze platter).

Next day we headed to my people's version of the Old Country -- the Lower East Side.  We had a late breakfast of Yonah Schimmel's knishes, a full afternoon of tours at the LES Tenament Musuem, and a late lunch of a Katz's pastrami sandwich which was big enough to share.  Yes, Katz's still has that sign posted about sending a salami to someone in the Army.  They also have a sign over the both where Harry Met Sally filmed the "I'll have what she's having" scene.

We also checked out the Essex Market and Russ and Daughters, but we were full, so we only looked and didn't taste.

Next up was the taping of the 13th to last Colbert Report ever with special guest Jon Stewart.  Between Steven Colbert and Stewart we couldn't stop screaming and laughing, although part of that might have been sheer terror the staff would do something to us if we didn't respond BIG.  (At least four staffers had us practice our screams, yells, claps and laughs before the show started.). They need not have worried, we the audience were so psyched on our own and so entertained we would have shouted ourselves hoarse without the pre-show encouragement.

Dinner that night was back in Hell's Kitchen for more ethnic food, this time empanadas at Empanada Mama, open 24 hours for all your meat and veggie stuffed pastry needs.

The next day we headed to the 9/11 Memorial and Museum.  It was moving, affecting and extremely effective at making the stories of victims and their families come alive.  A somber but necessary high spot of our visit.

Dinner that night was with friends at the vegetarian Candle 79.  The company was great, the food tasty as well as beautifully presented and it's quiet white tablecloth ambiance  perfect for catching up with old friends.  Afterwards we took in as light but fun Broaway musical -- Honeymoon in Vegas.

Next up was a subway ride to Penn Station, a short jaunt on NJ Transit and AirTrain to Newark Airport to rent a car for a visit to friends in Philly.  Highlights included Independence Hall, the Barnes Collection, a great tapas meal with some college friends and lots opportunity to visit with other dear friends who also hosted us.

Of course and we had a cheesesteak, which we split.  I've eaten the classic Pat and Geno cheesesteaks before, so I was willing to try something new, Sonny's. It was good, but surprisingly NOT that much better than my local cheesesteak shop. 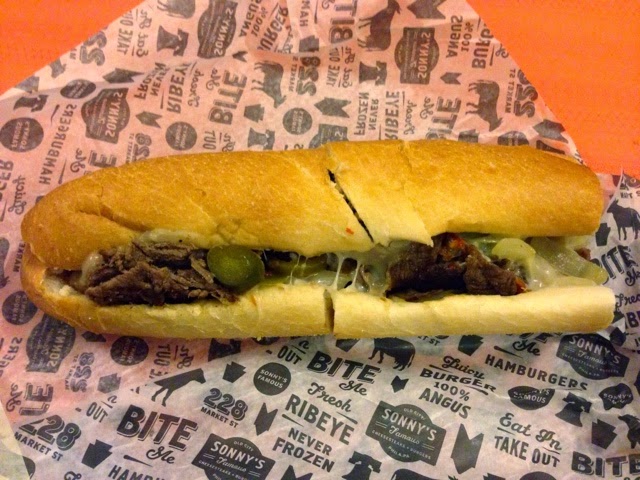 Then it was off to Long Island where my sisters made a scrumptious Thanksgiving dinner and I got a chance to eat in a number of diners where I had my old standby soup and tuna melts. (Until they bring back automats, diners are my fave retro food destinations.)

A few days later we wrapped up our trip by returning our car at John F Kennedy airport and taking public transit to NYC.  We stayed at the Hyatt Herald Square, this time a Priceline find.  We ate breakfast and a few other meals at one of the city's amazing salad bars which was part steam table, part short order cook, part grill and part sandwich shop.

We walked and walked.  Spent time at the Cloisters, New York's restored middle ages monastery, explored the Met museum, and saw the Tony-winning Gentlemen's Guide to Love and Murder.

We also had dinner in the West Village with high school friends of our oldest son.

Soon enough it was time to roll,our suitcases out and return to JFK for the trip home.