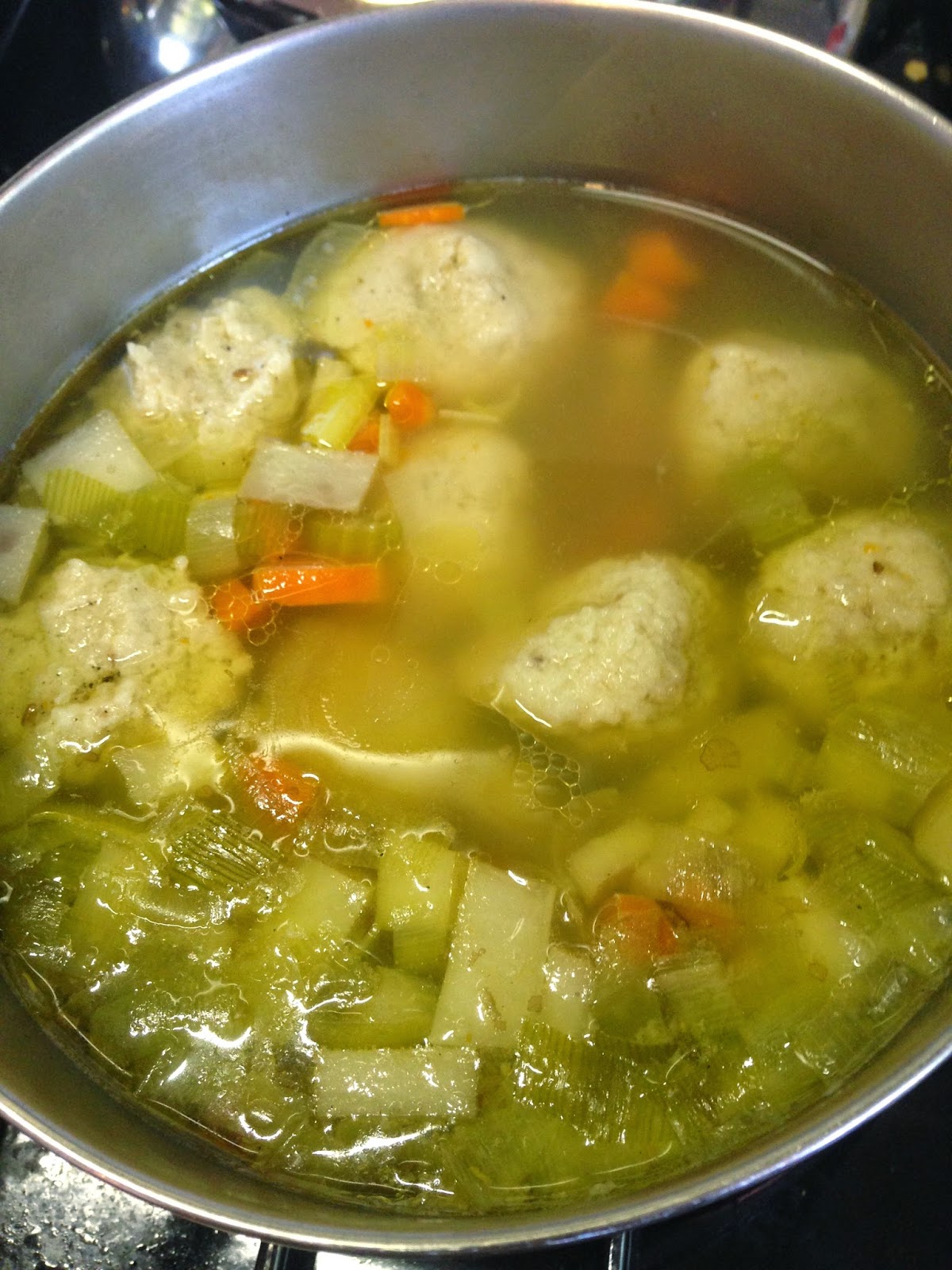 This is probably the trickiest and most detailed cooking post I’ve ever written, mostly because matzah balls are the most divisive Ashkenazi food I know.  Everyone has an opinion and most think their way is the best way.  Positions are taken young and kept for life.  I suspect marriages have failed because of sinkers and floaters.


With all that pressure, some home cooks are concerned about their matzah ball making ability and opt to use a mix (which still needs added ingredients and requires shaping and cooking) or ask others to make and bring the dumplings to their Seders.

Basically the debates center around ingredients, technique and whether the matzah ball itself is fluffy (a floater) or dense (a sinker).   Which is pretty much every aspect of matzah ball making. Oy.

One friend tells me she really prefers denser matzah balls, but she eats what she gets since she feels she “has no control” over how they turn out.

I can’t promise perfection, but I can give you some tips and recipes that should help anxious matzah ball makers.  Read on for my matzah ball recipes and my suggestions for gaining some control over the process and learn how to make the dumpling of your dreams, or at least close to it.

There are a variety of issues that affect your kneidlach success – the matzah meal itself, seasoning, leavening, liquid, and fat, as well as the shaping and cooking.

For some, the only good matzah meal is homemade, made of pulverized whole matzahs.  I’ve never done this myself, but it seems pretty straight forward and will yield the freshest matzah meal.  To make your own, break sheets of matzah into 1-2” sections and either grind in a food processor or put into double plastic bags and crush with a rolling pin, meat mallet or other heavy device.  You are aiming for pieces the size of commercial matzah meal (about 1/8”or less, be careful not to grind the matzahs too fine, then you’ll have made matzah cake meal).

If you are like me and use commercially prepared matzah meal, taste it before using.  If it tastes stale or rancid your matzah balls will, too.
The freshness of your matzah meal will also affect how it absorbs your liquid ingredients, so homemade might need a bit less liquid. Add a bit more liquid if the mix seems too dry, although a drier batter is preferred if you want dense matzah balls.


Seasonings are another point of controversy – some recipes use a lot of salt, others just a trace.  Some salt the boiling water, others do not.  My preference is to add about ¼ to½ teaspoon of salt per cup of matzah meal and use very slightly salted boiling water (maybe a ¼ teaspoon for a big pot of water). Pepper is a deal breaker for some, mandatory for others and then there is the question of white or black pepper.  My choice is freshly ground black and I specify the amounts I like to use in the recipes below.

Adding garlic powder and onion powder are options.  If you are used to matzah balls from a mix you may want to include those, since the mixes have them listed as ingredients.  How much to add?  I’d say that depends on your preference.  Start with a ¼ to ½ teaspoon each per cup of matzah meal.

Other variations include adding 1-2 tablespoons of finely minced fresh dill or parsley for each cup of matzah meal.   I prefer to sprinkle the herbs on top of my soup instead of putting them in the matzah ball.

My basic rule is to add the minimal amount of any seasoning and cook up a small test matzah ball and then taste.  If the seasoning is too light, add more to the rest of the batter to compensate.  Keep in mind the kneidlach will be served in a seasoned chicken soup.

For leavening I use eggs and only eggs.  Different size eggs will yield different amounts of liquid.  I usually use large or extra-large eggs.

Some recipes, particularly those promising fluffy results, include baking powder (which is available kosher for Passover).  It is also an ingredient in commercial matzah ball mixes.  The basic amount to add seems to be 1 teaspoon per ¾ cup of matzah meal in addition to the eggs.  Adding baking powder might be good insurance if a lighter matzah ball is imperative for your family and you do not want to risk a cannon ball.

For denser matzah balls, I beat the whole egg.  For lighter, fluffier ones, I separate the yolk from the white.  I beat the yolk until combined, but whisk the whites for about a minute until foamy and add separately.  See recipes for specific directions.

I prefer seltzer as my liquid. Some recipes use just a little liquid (mostly denser ones), others use more.  For years I’ve used seltzer thinking it helps lighten the texture but I’ve never done a scientific testing.  You can also use water or strained chicken soup instead.

If you use seltzer, be sure it is plain, unflavored seltzer.  Do not use club soda, which has salt added or sparkling mineral water which may also contain salt as well as natural mineral flavors.

Fat is another variable.  I think a neutral-tasting vegetable oil helps give fluffier results, but melted (and slightly cooled) chicken fat (schmaltz) makes for the tastiest matzah balls.

I think the shaping is crucial in determining the density of your matzah ball.  The less handling, the fluffier your dumpling.
For ethereal, cloud-like kneidlach, use one spoon to pick up a portion of the batter and another spoon to slide the portion into the boiling water.  This results in free-form dumplings that are incredibly fluffy with no chewiness. Warning, even some floater enthusiasts find these too light.

For fluffy kneidlach floaters that actually look like matzah balls, wet your hands with cold water and handle the dough as little as possible to form rough rounds.  Don’t compress and don’t roll the balls in your hands any more than necessary.  I’ve seen batter destined for fluffy balls made dense by over handling by cooks who are determined to have perfectly round, evenly shaped matzah balls.

For dense, heavier matzah balls (I can’t actually guarantee they will sink, but they will have the slightly chewy texture those who like sinkers prefer), shape with wet hands, rolling and compressing the dough until if forms smooth, even rounds.

How your kneidlach are cooked can also help determine their fate as sinkers or floaters. Put your matzah balls in a pot of simmering water with plenty of room and they will expand more and have a lighter texture.  Crowd them and they will not expand as much and remain denser.

If you are multiplying the recipes or do not have a big enough pot to simmer the matzah balls in, either use several pots at once or cook them in batches.
Many recipes tell you not to peek once your matzah balls are simmering.  For the fluffy matzah balls, I like to check after about 30 minutes to turn the dumplings over or spoon simmering liquid on them if it appears their tops are drying out.
Sometimes I find the matzah balls take more than the stated time in the recipe, so be sure to check for doneness and not just go by the clock.  I test by cutting one in half.  There should be no raw spots.  A fluffy dumpling should be uniformly creamy white inside.  A denser matzah ball will be more compact and darker, but still uniform.  Both types should taste cooked through.

Once the matzah balls are added to the water, make sure the water stays at a simmer.   The more intense boiling can break apart the dumplings.

I prefer to reheat the matzah balls in simmering chicken soup.  For a recipe and techniques for chicken soup, please check out my Chicken Soup 101 post.

I drain the cooked matzah balls on wire racks set inside baking trays.  For storing in the refrigerator, I place in sealed containers, separating layers with oiled waxed paper.  For longer storage, I freeze on a baking tray and then put the frozen individual dumplings in an airtight container or plastic bag.

Below are two recipes.  One is for fluffy matzah balls and it is based on a recipe from my husband’s Aunt Betty, who was the matzah ball making maven of her generation.  Another recipe is for dense matzah balls.  For a gluten-free option using chicken and almonds, click here. I can’t make iron-clad promises about texture and density in matzah ball making but I can promise that with time and an understanding of the variables, you will get a feel for what makes a good matzah ball for you and your soup.

Separate eggs.  Whisk egg whites for 1 minute until foamy.  Beat yolks in a large bowl until combined.  Add oil, seltzer, salt and pepper to yolks. Mix well. Slowly stir in matzah meal with a fork until well combined.  Fold in a third of the egg whites.  When incorporated, fold in another third and then the remaining third.  Cover with plastic wrap and refrigerate 2-3 hours or overnight.  (Batter will thicken as it chills).

Before shaping, bring a very large soup or stock pot of lightly salted water to a boil.  Chill a plate and lightly coat with oil.  Wet hands and gently shape into 1” rough balls being careful not to over handle or compress the dough, placing finished balls on plate.  When they are all formed, gently add balls.  Once the water has returned to a simmer and the matzah balls are floating on top, cover and cook at a simmer for about 50 minutes.  (After 30 minutes of simmering time, check and quickly turn the balls while they cook).  Remove with slotted spoon and drain.  Store as directed in article or reheat in chicken soup.

Mix eggs with water, matzah meal, oil, salt and pepper. If the dough is too stiff to stir, add a bit more water. Cover and refrigerate for 1 hour or overnight.

Bring a large pot of slightly salted water to a boil. Wet hands, roll dough into 1” balls, pressing and shaping to compress into a smooth round shape, placing shaped balls on plate.  When they are all formed, gently drop balls into boiling water, then bring back to a simmer.  Once the water has returned to a simmer and the matzah balls are floating, cover and cook at a simmer for about 30-40 minutes.  Remove with slotted spoon and drain.  Store as directed in article or reheat in chicken soup.
---------------

This originally appeared in Temple Beth Abraham's Omer publication.
For Serios Eats 9/15 matzah ball primer, see the article at http://www.seriouseats.com/2015/04/how-to-make-the-best-matzo-balls.html
Posted by FJKramer at 9:44 AM