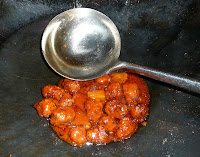 Sweet and sour describes my attitude towards China right now as well as the sauce for a Cantonese style dish I learned to make from Chef Jing at the National Vocational School in Shanghai. (Click here to read more about this experience and for my recipe for Ma Po Tofu.)

Sweet, of course, describes the many, many positive experiences I had in China. The people, the places and the sights were incredible. Many of these good experiences were food related. In Shanghai there was a wonderful vegetarian restaurant, the name of which translated to Godly. One walked into it from the bustling shopping street through the busy takeout counter and into a seating area that could only be described as a sanctuary for the senses and with food to match. Another special meal was experiencing the tasting menu at a famed restaurant in the Bund. In Xi An it was discovering the Moslem quarter and its lamb and mutton based cuisine. In Beijing it was exploring tea houses, Chinese home cooking and Beijing duck. Everywhere there were snack streets and night markets to sample. And every morning the hotel breakfast buffets brought a world of Asian food to our plates and palates. A morning bowl of rice congee (jook) or gruel topped with everything from fish flakes to peanuts became my breakfast staple.

The sour, well that’s a bit harder to digest. There is the complicated political situation and the world wide concern about the Olympics. There was the pollution, the traffic and other concerns. Of course, sour plays a component in Chinese cooking as well. A Chinese meal is balanced with many tastes playing against each other, including the sour. Often the sour is a simple pickled vegetable. Other times it might be a component of the sauce for a more elaborate dish. And of course it is balanced out by the sweet. Perhaps life isn’t a bowl of cherries but a dish of sweet and sour sauce.

At the cooking school in Shanghai, this was made with cubes of pork (see variations below). I thought the fish would be lighter and it worked very well. You could also try chunks of chicken or perhaps firm tofu. The version below is based on my experience at the cooking school and recipes I brought back from China. The main difference is that the directions below result in the protein (fish in this case) being less dense with a puffier, eggier crust. In Shanghai we were instructed to dredge chunks of pork into cornstarch and then compact them until they resembled oversized marbles instead of the approach below.

The ketchup in the recipe is totally authentic, much to my surprise. I haven’t done the research so I don’t know if sweet and sour pork began life in this country (perhaps as an adaption of a traditional dish or a unique one based on Western food availability) and migrated there or a traditional one that was adapted as Western ingredients made their way to China. (The whole concept of ketchup began life as Asian fish sauce to begin with, but that’s another post.)

Make the sauce first in either the wok or another pan.
Combine all the sauce ingredients in the pot. Heat over medium heat, stirring occasionally, until the sugar is dissolved and the mixture is well combined. Taste and correct the seasoning, adding more vinegar, ketchup and/or salt until you have the preferred balance of sweet vs. sour. Set aside off the heat. (If you have used the wok for the sauce, thoroughly clean and dry it before frying fish.)

Prepare fish. Rinse and pat fish dry. Sprinkle fish with salt. Cut into approximately 1 ½ inch cubes or chunks. In a large enough bowl to hold all the fish cubes, combine eggs and cornstarch until well mixed. Add the fish cubes and toss to coat thoroughly.

Heat oil for deep frying in the wok or another deep, large pan, such as a chicken fryer or sauté pan. Heat oil until is medium to very hot (about 375 degrees F). (To see if the oil is ready, drop a bit of batter if it immediately sizzles and begins to brown, the oil is ready.) Add a few fish cubes at a time, frying until golden brown and cooked through and removing to drain on a plate. Continue until all the fish cubes are fried. Set aside.

Properly dispose of the oil, leaving about 2 tablespoons in the wok or pan. Strain out any left over fried bits with a slotted spoon or skimmer. Heat oil until very hot. Add the garlic and stir fry, being careful not to burn it. Add the scallions and the pepper cubes and stir fry until the pepper pieces begin to soften. Add in reserved sauce and bring to a boil. Slowly drizzle in the cornstarch mixture, stirring until it is well combined and the sauce is thickened. It should still be liquid, but not runny or thick and should coat the back of the spoon. Stir in pineapple chunks and the pork. Mix to evenly distribute sauce.
Serve with rice.

You could certainly add some crushed red pepper flakes or chilies to the stir fry if you wanted to make an untraditional, spicy, sweet and sour dish. Or add some ground Sichuan brown peppercorns to the sauce.

To make a version similar to the one I made at the cooking school, make the sauce by mixing in a bowl 4 tablespoons ketchup, 2 tablespoons vinegar and 2 tablespoons sugar. Add pineapple, set aside. Use pork cut into 1 inch or so long rectangles. Dredge in cornstarch and compress by squeezing each piece in your hand until it resembles a small, hard-packed meatball. If the cornstarch has been absorbed or come off the pork ball, roll it in cornstarch again. (Chef Jing explained that this compression helps keep the pork from drying out and getting hard when it is fried.) Fry in oil as directed above until cooked through. Drain all but about 2 tablespoons oil from the wok. Heat the oil (omit the garlic, green onions and peppers). Add the ketchup mixture, stir until it begins to liquefy and add just a teaspoon of the cornstarch mixture at the time, stirring in it until you get the consistency of the sauce you want. Add in the pork cubes, stir to coat in the sauce.

About the photo: A just prepared wokful of Chef Jing's Cantonese-Style Sweet and Sour Pork at the National Vocational School, Shanghai.