My Well Fed Report on the Winter Fancy Food Show 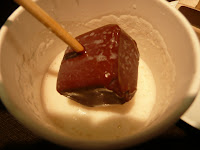 Here's a reprint -- My Well Fed report on yesterday at the Winter Fancy Food Show.

This was featured on Well Fed on the Town and the Well Fed "front page." Check it out there to see any comments and the photo of Linda and her laktes.

Life was sweet in San Francisco this Sunday. It was also salty, sour, saucy and very tasty. It was the opening day of the Winter Fancy Food Show, sponsored by the National Association for the Specialty Food Trade, Inc.

About 17,000 food buyers and other attendees swarmed the more than 1,200 exhibits featuring everything delicious, at least to someone. Most booths offered some kind of sample. Rare cheeses, serrano ham, and caviar with flavored popcorn, salsa and chips, chocolates and candies, teas, coffees, cookies, and much, much more. In my first relatively quick walk through (which took about five hours) of the 198,000 square feet of exhibit space at SF’s Moscone Center I began to process a bit of what I was seeing and tasting. Some first impressions:

Sugar and Spice — Flavored and gourmet salts were well represented, besides the bacon-flavored salts. I was intrigued with a chocolate-flavored salt. With all the chocolate caramels I tasted at the show made with sea salt, grey salt, fleur de sel, Hawaiian salt, wine-infused salt, etc, it seems like a natural match. Unfortunately, I didn’t get a chance to sample that. Flavored sugars, spice mixes and spice rubs were also well represented. One exhibitor that caught my eye was The Spicy Gourmet which offers a “grind-it-yourself” assortment of spices (including a spice grinder).

Tea Tease — Each year I attend there seems to be more and more tea vendors. While there are still plenty of traditional tea bags out there, loose teas and more “authentic teas” are gaining favor. I spent some time at the Dragon Pearl Whole Teas booth, learning about the benefits of organic tea. I also noticed that oolong tea seems to be becoming more of a sought-out ingredient, perhaps because of its association with weight loss. Besides Stash’s oolong blends, I also saw other vendors offering bottles of oolong iced tea, oolong energy and antioxidant drinks and more. Puerh tea seems to be coming into its own, too, especially at the Numi booth.

Children’s Hour — Motherhood seems to be the motivation for some gourmet products from Linda’s latkes (potato pancakes) to whole grain porridge. I also saw a number of exhibits with baking or cooking kits aimed at the young. For the young at heart there were jars of buttercream just waiting to be spread on cupcakes, gourmet lollipops and homemade marshmallows.

Around the World — While vendors from around the world were scattered through the show floor, there were some national groups — Canada, Chile, Italy, Spain, France come to mind. I also saw some exhibitors from Tunisia (a lot of olive oil and tuna fish) and even Egypt (frozen vegetables).

Chocolates — The trend toward single “vintage” or single source chocolate continues, as does flavoring chocolate with wines, spices and chilies. I didn’t notice as many sources of hot chocolate as I had in the past, but the one I tried I nearly swooned over. Belgian chocolate ganache on a stick you swirl in hot milk. (I also tried swirling it in my coffee for a luscious mocha.)

Downsizing — I saw some cheeses and even a pate that were boasting they now come in smaller serving sizes. I don’t know if that is a price issue or a way to get into the single serving market, but I thought it was interesting.

Health Matters — Lots and lots of drinks and teas promoted for your health, but I saw a lot fewer mangosteen and pomegranate options than in the past. Flavoring goodies with agave nectar (for a lower glycemic impact than sugar) and offering gluten free products seemed to be new trends. There were also a few booths promoting products to freshen your breathe.

Mix It Up — I saw lots and lots of mixes ranging from packs for slow-cooker dinners to the ubiquitous chocolate lava cake. One I won’t be trying soon is the carrot cake whoopie pie. When I make whoopie, I want chocolate.

I’ll be digesting everything I saw (and tasted) for a while and look forward to writing more about the companies, products and trends I discovered
-------------------------
Food Fete Update -- I attended a "media" event designed to showcase sponsored brands at the Fancy Food Show called Food Fete on Monday night. As usual, it was a great time (thanks Jeff and Dave and staff). I tend to use the event as background info for future posts not the stuff of a post on it's own. But Ben of Cooking With the Single Guy did a fabulous write up over on his blog, so I'm linking to it here so you can see what we ate, who we met, etc.
Thanks, Ben.
-------------------------

About the photo — Special for Blog Appetit readers -- Choco-O-Lait's Belgian hot chocolate on a stick.