Today Green is the Color of Mourning and Remembrance 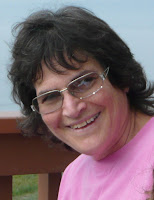 My friend Marcia Senk Miller was strong, independent, smart, a truth-seeker and sayer and she really liked the color green.

I knew her for almost 30 years. We were single in the city together, exploring San Francisco and building our careers and helping to raise money for non-profits. Then, with our boyfriends and later husbands, we went river rafting, cross-country skiing and on other adventures. As mothers of young sons we sat and chatted at Chuckie Cheese as our kids whacked the moles and dived into ball pits. Later we'd meet to explore Sonoma and Petaluma or enjoy a seaside weekend away from it all and generally try to figure out what we wanted to be when we grew up.

Marcia passed away last night after a relatively short battle with cancer. She leaves behind two college-age sons, a husband, two brothers and her father as well as a wide circle of family and friends to whom her name will always be a blessing.

Marcia inspired several of the recipes that have appeared in Blog Appetit. Among them is Marcia's Mom's wonderful mini cheesecakes. Please check out the post which includes some remembrances of Marcia's mom as well as the recipe. I'll be making a batch for after the memorial service. I'll top them with slices of kiwi fruit, the only green fruit I could think of. Oh, and I plan on carrying or wearing something green to the service as a connection to a friend's spirit that will never be forgotten.

Update: Her obit here
Posted by FJKramer at 4:19 PM

Email ThisBlogThis!Share to TwitterShare to FacebookShare to Pinterest
Labels: My Life

I enjoyed reading about your friend, and I'm sorry for your loss. Best wishes.

Came here to look at your redesign and found this. I'm so sorry to hear about the loss of your friend.

Lovely story about your friend. I really got a sense of how much loss you are feeling after so many years of friendship.

There are some personal essay columns in More where you could expand the piece. I just read one about the author's father dying. Great stuff. Really.

I met Marcia playing volleyball at the Marina District in SF. She lived near Chestnut Street, buying a home in south SF. Those were the days... She worked for Levi Strauss, a very intelligent young woman, we shared some fun times. Didn't last, I moved to Salt Lake (what a contrast). She will always be remembered as someone who did effect my life, very fond memories. Arie

I was missing her today reading your blog was a comfort. I have Erwin moving down to MV in the next few months!
Much Love,
Steve