Buenos Aires Photo of the Day - The Neighborhoods of Palermo 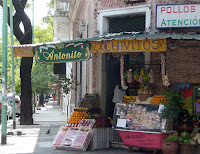 Palermo is the trendy, up and coming neighborhood for many visitors and residents, but Laurie and I found that it is really a series of neighborhoods that can vary from street to street and section to section from fairly industrial to working class to hip to very upscale. Like all the neighborhoods we explored, each section had its own "center" with grocery stores and other markets serving the local community. This photographically appealing store was a gem. Even the watermelons it had on display were carefully arranged and polished to a bright gleam.

One telling scene was a store window in Palermo Hollywood full of merchandise such as T-shirts and mate mugs saying (in Spanish and English) that there is No Hollywood in Palermo or variations of that theme. I took it to mean there is some local resistance to the gentrification that is going on in some of the neighborhoods.

Buenos Aires Tourist Tip: Check out the crafts market (seems to be open daily but probably more vendors on a weekend day) at Plaza Serrano (also called Plaza Cortazar) in an area filled with cafes, restaurants, and inexpensive stores. (I got a beautiful fringed scarf for about $10). 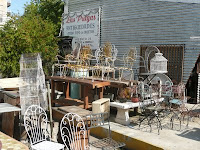 The space is undergoing renovation and it is temporarily housed in adjacent buildings in the area bounded by Dorrego, Martinez, Concepion Arenal and Cabrera. It reminded me a very little of the Paris flea market. Most items were too bulky to take back on the plane, but you might find a treasure or two. It was interesting to poke around but I wouldn't call it a must see.

We spent the day walking through the various Palermo neighborhoods (they do cover a lot of area) checking out the stores, cafes and helarerias (Argentinean gelato and ice cream stores). There are also museums and parks to explore. I know many tourists like to stay in this neighborhood. I think the plus would be that you feel part of a neighborhood, the minus could be since the sections of Palermo vary so widely you want to be sure to get a feel for the area you are considering staying in.
Posted by FJKramer at 10:47 AM

Hi, the name of the district is Palermo, not Palmero.
Cheers!

Oops, sorry for the typo.
I've fixed them all.
Thanks for the heads up.
FJK