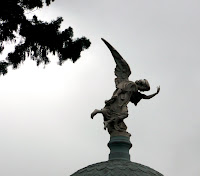 My friend and I spent our second day walking and wandering through the Microcentro, Retiro, Barrio Norte and Recoleta districts of Buenos Aires. A highlight was the famed Recoleta Cemetery. The day had been somewhat cloudy but by the time we got well into the maze of crypts and feral cats the heavens truly opened up and we got drenched. It didn't matter, we were so entranced that we stayed and continued to explore. The cats were smarter, they knew which crypts they could hide out in. We humans were a little more perverse about ducking into a crumbling mausoleum to get out of the rain.

Of course we tracked down Eva Peron's final resting place in the Duarte family crypt but there is so much more to admire and wonder about in this city of the dead, with its lanes, mini-mansion buildings, scultpures and cats.

Buenos Aires Tourist Tip: After you explore the ornamentation of the houses of the expired, check out the neighboring Buenos Aires Design Center for how the living are decorating their abodes. Lots of interesting housewares make for different souvenirs. The patio cafe offers a free tango show on Wednesday (which was rained out when we were there so I can't give you any details). You'll also be close to El San Juanino on Posadas Street. It's a regional Argentinean restaurant where we had by far the best empanadas in Buenos Aires (except for maybe the ones we made ourselves.) More on El San Juanino and the cooking class in later posts.

If you have a nice day you could retreat across the street from the cemetery to the historic La Biela cafe under a 200-hundred year old tree, or the less atmospheric and much less expensive Aromas cafe. Both are pleasant spots to sit and reflect (and enjoy the street scene and musicians) in this very upper class neighborhood.
Posted by FJKramer at 9:22 AM

My name is Graciela, I am Teresita's daugther. My mother gives cooking classes and culinary tours of traditional cuisine of Argentina in Buenos Aires. Next time if you fly to Argentina, it will be our placer to have you cook with us! our invitation.

You can read all about her classes and herself at http://www.try2cook.com

It was Teresita's class we took to learn how to make empanadas.
It was a great experience and I recommend you try them if you are in the Buenos Aires area.