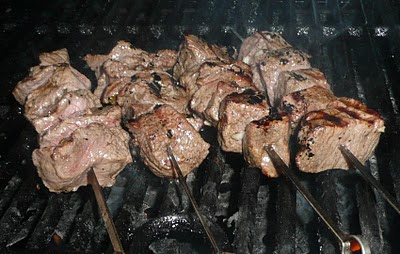 A man sits under some trees and spies three strangers and begs of them to partake of his hospitality. He asks his wife to quickly make some cakes out of the choicest flour, he tells his servant to kill a calf and prepare its meat and he brings his guests refreshing curds to eat.

It is this passage in this week’s Torah portion from Genesis (Bereshit 18:1-22:24), known as Parshat Vayera, that is the basis of the mitzvot of hachnasat orchim, or welcoming guests. Abraham’s actions are even more remarkable in that G-d has appeared before him and he must turn away to offer the strangers succor.

This portion fascinated me for several reasons. The first was the importance of the act of hospitality. The second was practical. Killing and butchering a calf doesn’t seem like my idea of a quick meal these days. The third was historical. What kind of cakes would Sarah have made with her choice flour? How would the meat be prepared to cook quickly?

Based on this parshat, I’ve put together a menu that reflects some of the above. The recipes are all relatively quick to make. The cakes Sarah made were probably a form of flat breads or quick breads made of barley flour. Cutting the beef into small cubes reduces cooking time. As for serving curds with meat, the laws of kasruth now prohibit that, but a dessert of non-dairy vanilla yogurt drizzled with honey and sprinkled with chopped dates and nuts would be just as satisfying.

A version of this post first appeared in the j. weekly.  Here's the link to the column there.

If desired make additional marinade and use it to marinate sliced zucchini or other vegetables for the grill. Serve the kabobs with quick-cooking couscous and the barley cakes.

Note: If using bamboo or wood skewers, soak in water for a half hour before using.

In a large glass or stainless steel bowl combine the oil, juice, black pepper, salt, oregano, red pepper and garlic. Stir well. Reserve ¼ cup of marinade. Combine the steak cubes with the remainder and toss well. Use immediately, or if desired, cover and marinate for 30 minutes to 2 hours.)

Preheat broiler or grill. Thread the steak on 4-6 skewers. Place under broiler or on medium high grill, basting with the reserved marinade and turning occasionally until cooked to desired doneness. Serve on or off the skewers. Sprinkle with parsley.

These round quick breads have an earthy, satisfying taste. Barley flour is available in many natural food stores and on line.

In a large bowl, mix the flour and salt. Drizzle in olive oil and water, mixing continually. Continue to mix (or use hands) until a dough forms. Working with your hands, knead the dough in the bowl for 2 minutes until smooth. Cover with damp cloth and let rest 30 minutes.

Separate dough into 8 balls then flatten and pat each into a rough disk about 2-2 ½ inches in diameter and about ¼ to ½ inch thick.

Heat vegetable oil in a heavy fry pan over medium high heat. Fry cakes 1-2 minutes on each side, adding additional oil as needed, until lightly browned on both sides and cooked through.

Because of Jewish dietary laws, this recipe uses non-dairy yogurt, but  if you'd like substitute regular yogurt.  To keep it vegan, use the non-dairy and drizzle with maple or date syrup instead of the honey.

Place about ¾ of a cup of yogurt in each serving dish. Drizzle each serving with the honey, sprinkle with ¼ of the dates and chopped nuts and scatter ¼ of the mint over top.
Posted by FJKramer at 8:19 PM