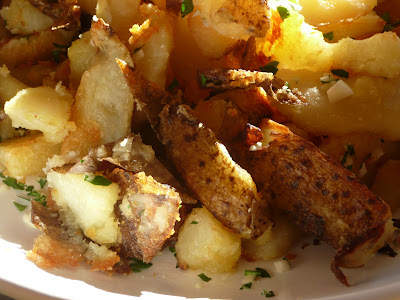 Well, maybe these oven-roasted garlic fries didn't WIN the series for the San Francisco Giants, but they had to help.  A riff on the garlic fries served at the Giants' AT&T Park, they were a special request when my guys watched the final game of the National League West division playoffs.  All I know is that my fries were a hit and the Giants won.  Guess I'll be making this again for the upcoming league championship series as well.

(Oh, and the garlic fries are probably the main reason I love going to AT&T Park. I even get them when I go to hear the San Francisco Opera's free simulcast every year.)

These fries could be called twice-cooked garlic fries.  The double cooking gives them a crunchy crust and rustic appeal.  Not a garlic fan?  Skip the garlic (and parsley if you want), the fries will be almost as good.
I leave the peels on the potatoes because we enjoy how the bits and pieces that separate get nice and crunchy. (And speeds preparation time).  Feel free to use peeled potatoes if you prefer.

Scrub the potatoes, but do not peel.  Slice each potato in half so you have two long sections.  Slice each of those sections into four long pieces.  Boil in salted boiling water until almost tender. Drain well.  Don't worry if the potatoes have lost a bit of their shape or the skins have separated.  Oil 2 large baking pans or trays.  Put 1/2 cup of olive oil in a large bowl, add some salt if desired, and toss with cooked potato. Spread the coated potatoes out in a single layer on the baking trays.  Bake in a preheated 475 degree oven, turning occasionally until the potatoes are browned and crisp. (This can take anywhere from 30-50 minutes, so keep a close eye on them.)  Remove from oven and while still very hot toss with salt to taste, minced garlic and chopped parsley.
Posted by FJKramer at 9:00 PM

These look so good! I'm going to print out your recipe and hope to try them soon -- maybe tonight, while I'm listening to the Giants' game on the radio :) Thank you for sharing these.