Potatoes (and Potato and Greens Soup) in Portugal 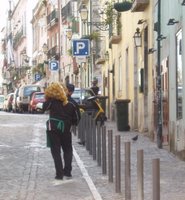 One of the biggest culinary revelations I had in Portugal was the wonderful, nutty taste of the Portuguese potatoes. Somehow the potatoes there just have a bigger, fuller, potato flavor. You (or at least I) could have made a meal just from the potatoes.

The closest I could describe the potato taste is that of a freshly dug, organic Yukon gold or yellow finn. Buttery, rich and satisfying. Lucky for me, big slices of boiled potatoes were the side dish of choice for many dishes. Potatoes are also the main ingredient in the famous Portuguese soup, Caldo Verde. It is basically water, potatoes, olive oil, Galician cabbage and seasoning. Some books describe it has having a garlicky sausage sliced in (and I've made it that way) but in Portugal I was never served Caldo Verde (Green Soup) with it.

Because our potatoes are not as flavorful as the Portuguese, I've adapted the recipe from Jean Anderson's comprehensive The Food of Portugal cookbook to reflect my recent experiences with the soup in Lisbon and Porto as well as making it here at home. (The book is available from the always dependable Iberian resource The Spanish Table.) 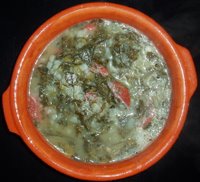 Be sure you pick a potato that will mash well. Anderson recommends an Eastern or Maine potato, which is probably like an Idaho or Russet.

1 large onion, chopped fine
1 large garlic clove, minced
4 tablespoons of a flavorful olive oil (divided) -- try one from Spain or Portugal if you can. You want something with a bit of a bite to the flavor
6 large potatoes, peeled and sliced thin
1 quart water
1 quart vegetable or chicken stock
6 ounces thinly sliced dry garlicky sausage such as chourico, chorizo or pepperoni, optional. (I used turkey pepperoni in the version pictured above. You could also try one of the new soy sausage products.)
2 teaspoons of salt, divided (more or less to taste)
1/4 teaspoon freshly ground pepper (more or less to taste)
1/4 teaspoon dried red pepper flakes, optional 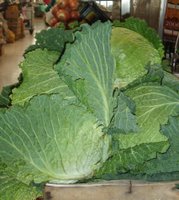 1 pound mixed sturdy greens. To replicate the flavor of Galician cabbage (see left) I used half collard, half kale. You could also use some turnip greens. The greens should be washed, trimmed of thick stems and veins and sliced into thin threads. (I rolled the greens into bundles and fed the bundles through my Cusinart using the slicer blade. It worked well and takes longer to explain than do! Just make sure your shreds are what Anderson calls "filament" thin.)

In a heavy soup pot, heat three tablespoons of the oil and then add onion and garlic. Saute for a few minutes over medium heat until they begin to color. (Anderson advises being careful not to brown them since that will make the soup bitter.) Add the potato slices and saute, stirring for two to three minutes until they too begin to color. Add the water and stock, cover and simmer until potatoes are very soft, about 20 to 25 minutes.

If you are using the optional sausage, prep the slices while the potatoes cook. Fry the sausage slices in a skillet over low heat until most of the fat is cooked out. Drain on paper towels and pat to get off excess fat.

When the potatoes are soft, take the pot off the burner and use a potato masher to mash the potato slices right in the pan. When the potatoes are as smooth as you can make them, add the optional sausage, half of the salt, all the black pepper and the optional red pepper, put the pot back on medium heat, cover and bring back to a simmer. Simmer for about five minutes. Add in the sliced greens and cook uncovered until the greens are tender (about five minutes). Add in the last tablespoon of olive oil and taste to adjust for salt and pepper. Depending on how salty your chicken stock is you may or may not need to use the last teaspoon (or even more) of salt.

Serve with a nice crusty bread and perhaps a little hot sauce on the side for those who like their food a bit more spiced. Tabasco is fine, but try to find a sauce made with piri-piri, small Angolan peppers which are the hot stuff of choice in Portugal.